Nerd Stuff I Kinda Forgot I Had: Part 1

Holy crap! I found some nerd stuff I kinda forgot I had! And I've just repeated the title of this blog post! Amazing!

So I'm going through my cupboards and a few boxes and I'm digging through some stuff that I'm thinking of parting with when this little beauty jumps out. It's the launch collector's boxset of the MMORPG 'Warhammer Online'.

It's all complete and in fantastic condition. It's got the game, a wonderful hardback 'Art Of' book with some stupendous illustrations, the introductory comic (also in hardback), a mouse mat and, most importantly, the limited edition Grumlock and Gazbag Games Workshop figures still in their blister pack and in as-new condition.

I used to really enjoy Warhammer Online. After playing World of Warcraft for a few months and becoming utterly frustrated by the grind I just wanted to play a game where I did some exploring and fought some wars, and this was perfect for it.

There were two instances in the game where, playing my favourite character Hellfeur the Bright Wizard, I both inspired my forces to turn the tide of losing fight and win a siege and also made a momentous cockup that lost us the battle and caused an attack on Altdorf that we ultimately lost.

My inspiring words for the victory were - 'Hold them at the gates! Make them pay for every yard!'

My cockup phrase was - 'I don't see any destro'.

It was a great game and I had a lot of love for it. What a great find, I'm going to sit down and read the books right now. 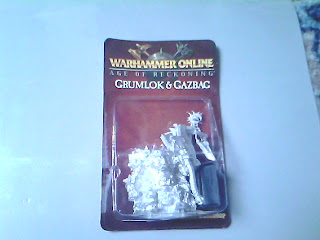 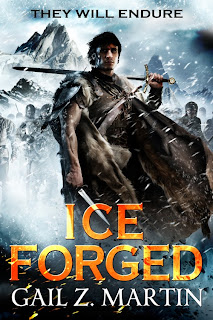 I pretty much needed to have a break from fantasy novels a long time ago. I'd absorbed stories from the greats, the not-so-greats and the simply mediocre, and I'd followed heroes of varying races, sexes and abilities as they trudged through dangers and battled foes. There was always a neat map of the world I was experiencing and, if I was unlucky, a glossary and history to go with it.

Gail Z Martin's book 'Ice Forged' is the first new fantasy novel I've read in a long time. Luckily for me, it was an absorbing and entertaining read and I didn't have to stop reading every five minutes to refer to a map or seek out a translation in a glossary.

'Condemned as a murderer for killing the man who dishonored his sister, Blaine “Mick” McFadden has spent the last six years in Velant, a penal colony in the frigid northern wastelands of Edgeland. Harsh military discipline and the oppressive magic of the governor’s mages keep a fragile peace as colonists struggle against a hostile environment. But the supply ships from Dondareth have stopped coming, boding ill for the kingdom that banished the colonists.

Now, McFadden and the people of Velant decide their fate. They can remain in their icy prison, removed from the devastation of the outside world, but facing a subsistence-level existence, or they can return to the ruins of the kingdom that they once called home. Either way, destruction lies ahead…'

Blaine is a pretty good antagonist and you get a feel for the character almost straight away - a no-nonsense, fists-first man who is very sure of himself and his abilities. At first I was concerned he was going to be a hero with shining white teeth who can't do wrong but as the story unfolds and you get to know him and the people he's teamed up with you begin to see him as a complex but decent man. His fellows are also interesting (if a little underdeveloped but that's not an issue, to be fair) and it makes for a good group you'd like to see go on a quest or two.

The first part of the book is a lot of world building but there seems to be a lot of portentous doom-laden prophecising going on about something bad coming, and then when something a bit bad does happen then there's a bit more talking about it. There's a moment where I found myself thinking 'just get on with it!' and I simply wanted the book to get to it's point. Nevertheless the world building is very good and the characters are given time to grow which gives you time to get to know them, but there is a point where I feel I know enough about the people to want to see the story put their talents and personalities to use. Luckily, the book shifted up a gear just when I started to get worried that the story wasn't going anywhere.

Once the disaster hits and the world starts to change (it has a post-apocalyptic feel to it, as the world is thrown into chaos) the heroes finally get their quest on which is a good thing, but just as the story starts to heat up and the action starts to flow, the book just kind of... stops. There's a good reason to want to continue with the second book, that's for sure, but I was expecting a better climax, or at least a shock revelation or twist that would leave you waiting with baited breath for the next installment. Sadly, you don't really get a satisfactory ending in that vein and you feel like that you've not been left on a cliffhanger, just that you've been left hanging.

Ice Forged is a very good book with some very well-defined characters and an intriguing plot that, if you give it time and don't expect it to leap out at you immediately, really delivers. The ending might feel a little flat after putting effort into getting to the end - and it is more than 500 pages long - but with the promise of another book to follow there's no reason to dismiss this volume at all.

A fresh coat of paint - the future of Farsight Blogger

Regular visitors to this blog will have noticed a change to the design and presentation of this site and the fact that posts have slowed somewhat over the last few weeks. This is because I've taken a break, stepped back from the hobby for a little while and tried to get a fresh perspective of what this blog is about and what it is I want to do with it.

I love tabletop gaming - roleplaying, boardgaming and, when I get the chance, wargaming - and I will no doubt continue to do it for a very long time, and whitter on about it on this blog. But there's plenty of other nerd stuff I really enjoy as well - movies, books, comics, toys etc - and I have plenty of things to say about these, too. I did briefly consider creating a new site which I designed and was going to call 'Farsight Nerdrage', designed specifically for these other loves of mine.

'Farsight Nerdrage' never materialised and I deleted the blog before posting a single comment, mainly because I honestly don't think I have the time to run two blogs about my hobbies. Instead, I've decided to amalgamate the two and write about everything I enjoy on this blog alone. There'll still be gaming articles and reviews but they'll be supported by other stuff that interests me, and hopefully you'll be interested, too. I've decided to be much more opinionated in my articles and express my views as I see fit. This isn't meant to provoke or upset people who have differing views from me but to invite discussion, heated or otherwise.

I'll also be inviting guest writers, too - if you have an article, review or just want to air some views then email me your stuff and, if it's suitable, I'll post it here.

Farsight Blogger isn't here right now as we're having a break for the summer. We're also going through some changes and redesigning the focus of this blog, moving away from general gaming-centric articles and reviews and embracing nerd culture as a whole, so expect some changes over the next few weeks.

Please leave a message after the beep.