I thought I'd keep a record of my work on Cyber Streets, and go over the 12k words I've already done for the game as well as chat about how I got here and what I intend to do next.

First of all, altough the game is called Cyber Streets and there are cybernetic options in the rules, that isn't what the game is focused on. First off, I chose the name Cyber Streets because it's kinda cool and rolls off the tongue nice and easy, and secondly I feel it grabs the attention. What I have tried to do is keep the 'cyberpunk' description out of the game as even though it shares those trappings I'm trying to avoid the whole street-gangs-attitude-style-rebellious nature of those games. In fact, I wanted to leave the 'punk' out of it all together. Can the players still play those kinds of characters? Yes, absolutely; the game doesn't restrict anyone from playing whatever they want, but the primary focus is on playing detectives.

So what makes it different? Well, I'm focusing on the natur of the game, what the players do in the setting, and that's the legal side of things, or at least legal from their point of view. Think an episode of Law & Order or CSI but in a futuristic setting, a cop procedural in a Blade Runner-inspired city where the players hunt down the people abusing this technology, but at the same time they are funded by the city-controlling corporations so their investigations can only go so far, or perhaps they are pushed in directions the corps would rather they go.

That's my aim with Cyber Streets; to make it more focused on investigation but still leave room for some good old fashioned action adventure. It's based on the Fireteam rules, after all, which were designed for fast combat games.

It started out as a basic setting for Fireteam - if you look at my original cover page test below, it was simply going to be a straightforwward cyberpunk game using the orignal core rules. However, it's now morphed into it's own thing, and I'll cover that in my next blog entry. 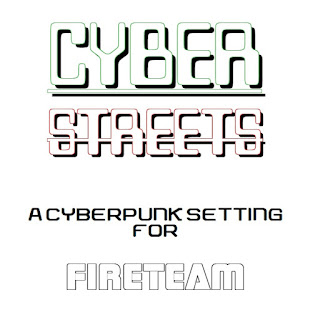 Cyber Streets is a dark sci-fi roleplaying game coming soon. Expect a game in a future noir setting where you play detectives dealing with crimes of all sorts in the Capital... 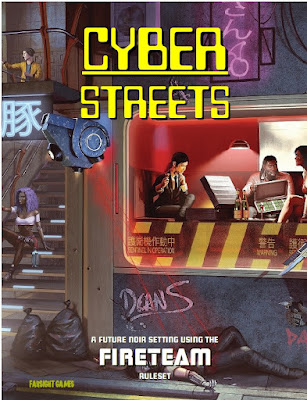 ... from genetic manipulation to cyber crime to ethically questionable technology to random scum and gangs.
Simulacrum hide among the people, corruption runs rampant in a corp-controlled government and a citizen is only worth what they can give to the big businesses.
There's the opportunity to play other elements of society by - freelance STS offices tasked with exposing the simulacrum, Street Teams coming together to do illegal jobs at night, or just citizens in the wrong place at the wrong time.
On top of all this are the detectives of the office with the most unfortunate acronym; the Street Detective Teams. Funded by corporations but expected to be the holier than thou face of a public institution, these investigators are under a lot of pressure to do the right thing, whilst trying not to upset their paymasters.
Oh, and there's flying cars, too.
Posted by Farsight Blogger No comments: