Those Dark Places: The Ana-Sin-Emid Report now available on Kindle

The adventure is now available on Kindle and Kindle Unlimited. 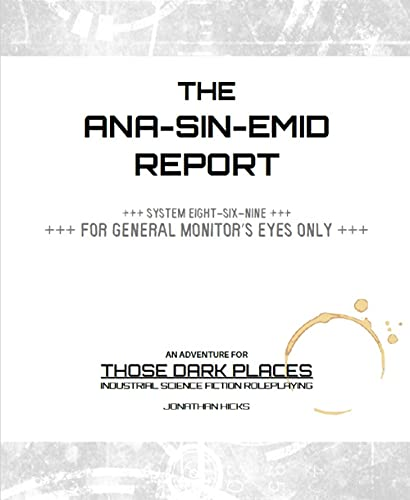 'The Ana-Sin-Emid Report' is an official adventure for 'Those Dark Places Industrial Science Fiction Roleplaying' published by Osprey Games.
Posted by Farsight Blogger No comments:

Dragon Warriors is one of the great British roleplaying games from the 1980s, and the classic system was given an update in 2008 by Magnum Opus Press, the torch of which was then picked up by Serpent King Games. You can learn more about the game and its history here. 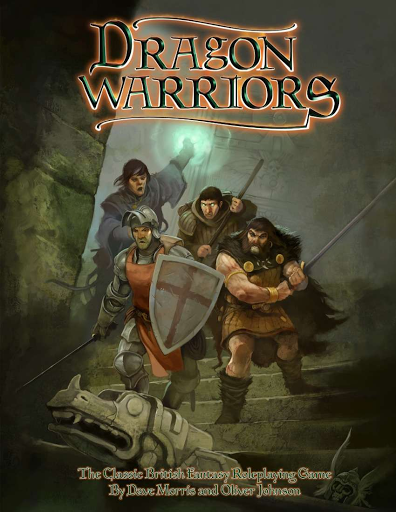 The game has a huge following and we were treated to many fan-produced products, namely the e-magazine Ordo Draconis and now the popular (and free!) ezine Casket of Fays, which has been bought to us by the talented Simon Barns.

I had a chat with Simon about the game and the ezine.

What got you into Dragon Warriors and how long have you been playing it?

White Dwarf 71. Did that come out in 85 or 86? Whenever, it had an adventure in it that was statted for AD&D and Dragon Warriors (Box of Old Bones). I read that adventure, I liked it, and I wanted more. I quickly worked out just what those little Corgi Books were. Books 1-3 were acquired, then the other three followed. I ran some games. I dabbled. Then the books got put away for a few years as I matured. Yeah, right. 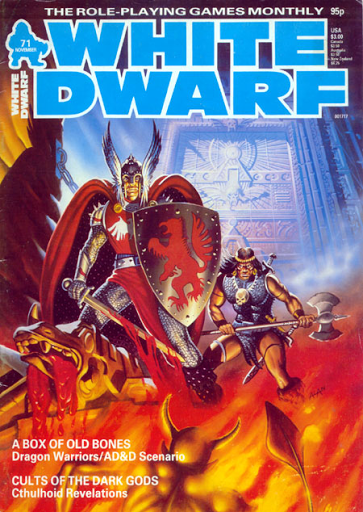 In the 2000s I came across DW again. I dabbled in a mini campaign, I got the DragWars Yahoo email, and I was on the DW Wiki. The wiki’s still running. Give it a visit. Be careful. It’s held together with string nowadays.

Late 2000’s, James Wallis announced Magnum Opus Press’ 2nd edition. I followed that (I even went to the launch party – which had a sword swallower – what a soiree!) and gradually picked the books up. I went back to lurking for a few years until the Dragon Warriors Facebook Group came along and things started moving along again. 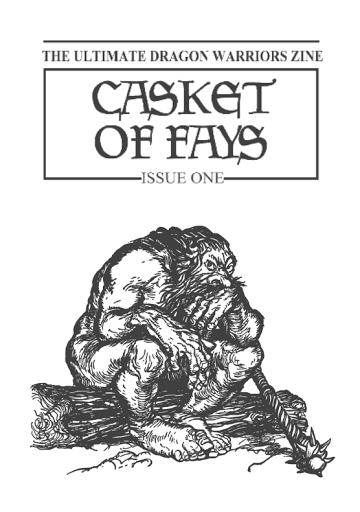 How did Casket of Fays come about? What made you want to create the zine?

Back in March 2020, I found myself off work with a lot of free time. I’d been looking at zines for a few years and the RPG Zines groups came to life.  There’s some fantastic stuff out there, as you’ll know. Wormskin is a fave, that’s the Dolmenwood zine, and if you’ve ever heard of Tekumel, you should check out ‘The Excellent Travelling Volume’ from James Maliszewski. It’s a rabbit hole, just waiting to be jumped down..

Anyways, I think it was June, there was a chat on the DW Group about Discord. I think Greg Dzi asked if there was a Discord, and Jimbo Healey said ‘No, but I can make one.’ Jimbo will be the first to admit that he doesn’t do tech, but I do, so I volunteered my excellent skills to support. We had a Discord.

Chat was had, and in the fullness of time I realised a few things. 1 - There was a load of DW material out there that would be great to bring out into the light. 2 - There were many DW lovers out there who, and I paraphrase Dave Morris here, ‘are up there with any commercial creators.’

That’s why it’s always gratifying to see fan material inspired by what I’ve written, and an extra bonus in the case of Legend is that it seems to inspire a quality of content on a par with the very best commercial RPG publishing out there. - Dave Morris

3 - I’d like to get a chance to mess around with zines. I suggested, I came up with names, people suggested better names, and Red Ruin Publishing was formed.

We weren’t the first though. ‘Ordo Draconis’ is in recent memory, along with its spinoff, ‘Cadaver Draconis’, and way back (and I’ve never seen a copy) there was ‘The Ereworn Ear’. If anyone ever sees a copy of that last one, please, let me know. 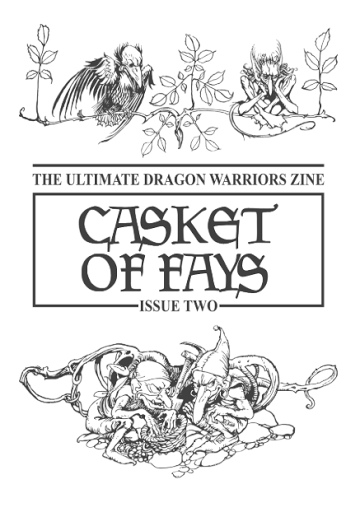 What's the future of Casket of Fays? Do you intend to keep going as you are, or are there plans for expansion?

Interesting you should mention that. We’ve done four issues now. Issue five is due out at the end of June. Give it a few weeks after I type this and I’ll start bothering the writers and artists again. We’ve got content in the archives for a couple of issues worth, and I’ve never been afraid to raid the archives from the wiki, but one thing which has been on the radar for probably the last couple of issues is size. I love A5 format (takes me way back to the good old Beholder zine) but sometimes we get submissions that would fill the zine on their own. We’re planning a ‘special’ – name to be determined yet – that will be magazine sized. Early days yet, but I’m talking to a couple of the old names of DW who will be familiar to many who were in the Yahoo group, and there is some exciting stuff coming. We should have some pretty colour too. 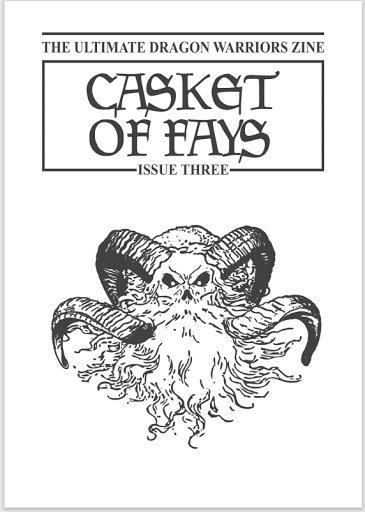 What would you like to see happen with the Dragon Warriors IP?

I’m eagerly awaiting DW 2.0 from Dave Morris, ‘Jewelspider’. I don’t think that’s going to replace 1.0 in my heart, but it’s nice to have options. Then there’s ‘The Cursed King’. I hope to see that soon, along with Brymstone. Over to Serpent King for those. Hopefully they’ll release ‘The Summoner’s Tale’ from Shaun Hately this year. That’s been on the cards for a while. I know Shaun and have gamed with him (Australian time!) and that adventure is like to be a treat.

I’d like more people to play DW. Had a vague plan last year to hit cons (armed with Casket of Fays) that got derailed. Let’s see what the second half of this year brings. Promote the heck out of the game, get on people’s radars, get more people involved, maybe get people to tout to SKG. There’s a lot of love for this hoary old game. I want it to last another 35 years. 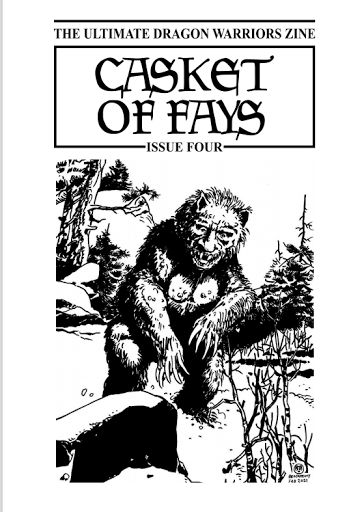 Any future plans for other releases, such as adventures or expansions?

My plans are so immense that I’ve moved up to a Trello board!

Solo adventures are coming. People like them. DW attracts people who played Fighting Fantasy. We did one solo as a trial, and, well, there’ll be more. We got great ‘sales’ off it. That was the ‘Village of Frogton’ from Jimbo Healey

There’s a further chapbook or two coming featuring Cedric and Fulk, Nigel Ward’s pair of monks. The Adventures of Cedric and Fulk #1 'The Wickedest Man in Banlet' .

Adventurers to the town of Chapelstone, an ancient Ta’ashim port that has been annexed by Crusaders, as well as ‘The Thousand Islands’, and for that, look in Casket #1 and #4 for a couple of peeks. These are being brought to us by Damian May.

There’s more, but those can wait for another day. Thanks for having me on, Jon!

I’d just like to thank the DW community for their massive support with the Casket. The zine has consistently had great content in that I’d be happy to compare to professional gaming releases.  I’ve made some great friends over the last year and gamed with a load of them in various campaigns. I’m not going to write them down as it’s a bloody great long list, so instead I’ll just tell you to check out these websites.

Welcome to the Great Library

Thanks, Dave for a good few years of gaming!

'The Ana-Sin-Emid Report', an adventure for Those Dark Places, is now live on @DriveThruRPG - boost the signal! 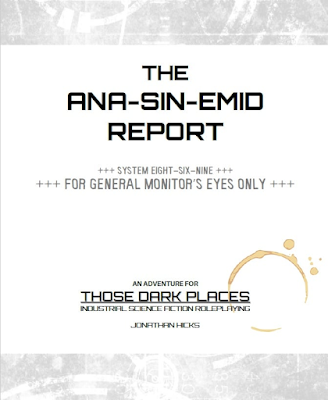 Warren, Gerry and Ben join Those Dark Places designer, Jonathan Hicks, for a one-shot session of this Industrial Sci-Fi roleplaying game published by Osprey Games.
Taking on the role of three crew members delivering important resources to Earth, will the crew be able to deal with the unfolding chaos of their new situation? In space, no-one can hear you scream. Featuring Those Dark Places artwork by Nathan Anderson!
Are you going to give this RPG a shot?
●●●●●●●●●●●●●●●●●●●●●●●●●●
We love games and we love our community even more, join us by subscribing to our Channel and visiting our website and social channels:
► Our Website: https://www.ontabletop.com/​
► Our Store: https://store.ontabletop.com/​
► Subscribe: http://ow.ly/4n9PEe​
► Twitter: https://twitter.com/ontabletop​
► Facebook: https://www.facebook.com/ontabletop/​
► Instagram: https://www.instagram.com/ontabletop_...​
► Twitch https://www.twitch.tv/ontabletoplive
Posted by Farsight Blogger No comments:

This is a great project I worked on for Warlock! and it's available now from DrivethruRPG.

An adventure supplement for Warlock!, the old-school roleplaying game inspired by the early days of British tabletop gaming.

Explore Bridgetown, before it falls into the Fardruin!

In this adventure for the Warlock! roleplaying game inspired by the early days of British tabletop gaming, the characters explore Bridgetown, once a wonder of the Kingdom, now a collapsing den of thieves, vagabonds and worse. Can the characters discover a missing bracelet of sentimental value before it disappears into the dark alleys and twisting paths of the ancient town? And what was that, scurrying about in the shadows..? 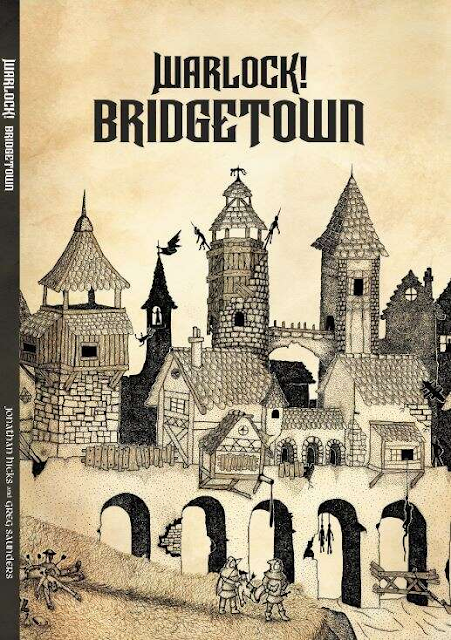