Path of Exile - an old gaming experience for the new age

There were two games on my PS2 that I loved to play; 'Baldur's Gate II: Dark Alliance' and 'Champions of Norrath'. Baldur's gate was a favourite of mine and I would play it over and over to max out my character.

They weren't really computer RPGs by any stretch of the imagination and it's only with the coming of MMO's such as 'Lord of the Rings Online' that we're any closer to true computer roleplaying games. I've always enjoyed the simple hack n' slash games, which were more about character abilities/gear management than anything else, and I've always been on the lookout for something similar. I regret parting with my PS2 because I do miss those old games (as well as all my original Grand Theft Auto games, of course).

I've recently been introduced to the game 'Path of Exile', and it plays in pretty much the same way as my old PS2 games. It's very simple, the mouse-dominated controls are intuitive and easy to grasp, and the layout and gameplay are a cross between Baldur's gate and Diablo.

'Path of Exile is an online Action RPG set in the dark fantasy world of Wraeclast. We're a small independent team of hardcore gamers based in New Zealand and have created Path of Exile as the game that we'd want to play ourselves. It is designed around a strong barter-based online item economy, deep character customisation, competitive PvP and ladder races. The game is completely free and will never be "pay to win".'

Up to yet I've had a good time with it and the option for online co-operative play looks attractive. I'll be having a blast with that with friends soon so I'll let you know how I get on.

It's totally free, quick to download, easy to play and looks great. Even though the designers have gone down the 'dark gritty realistic fantasy' design path (which isn't a favourite version of mine as I think 'dark' is simply done to make the world feel different and has no bearing on the way the game is approached or played), I'm not sure you could ask for more in a game.
Posted by Farsight Blogger No comments: 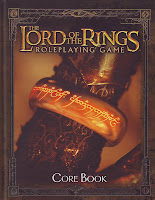 Peter Jackson's 'The Lord of the Rings' movies hit the cinemas and (after breathing a huge sigh of relief as I really enjoyed them, and had spent the last two years anticipating disappointment of Episode I proportions) I felt ready to tackle Middle-earth as a campaign world once again.

Instead of using MERP or any other fantasy RPG I decided to start from scratch and use the new Decipher ruleset, the CODA system. This had been used pretty well in their Star Trek RPG and so I had high hopes for The Lord of the Rings.

Although it didn't tick all my boxes it was a pretty good system and it played really well, and having the visuals of the movies really helped. Instead of several people sitting around the table with differing thoughts regarding the aesthetics and attitudes of Middle-earth, we were all on the same page. The players could visualise their heroes, they knew the look and feel of certain locations and, dwarf-tossing jokes aside, they pretty much stayed the course.

After several successful sessions it was the lore of Middle-earth that started to cause the problems.

Fifteen years earlier I had created and gamed in a Star Wars setting called 'The Setnin Sector', and we had been very careful to create a slice of the Star Wars galaxy that was somewhat removed from the rest of the universe, so it no only existed alongside the official Star wars universe it didn't intrude on it. This gave the sense that the players could still have their huge sector-shaking adventures yet not have any direct influence or effect on the Star Wars galaxy at large. It honestly gave them a sense of really 'being there'. The only golden rule we had was that no player character or story could outshine or contradict the established characters and saga.

Not so with this game. It was not the system that was at fault but, once again, it was the attitude to the game. Once the players were comfortable with the system they wanted more. More adventures, more places to explore, more power and glory. We had come to the game with the same mindset as far as the setting was concerned but the players still wanted to grow in power an influenced as they had in other RPGs. As I was trying to treat Middle-earth the same way as I had treated the Star Wars sector I had created and that was simply impossible; thousands of planets versus a continent? Where could the players honestly go?

With things like Warhammer's Old World and the Cthulhu Mythos I had more than gladly taken liberties with the setting, even changing the entire history and the pantheon in the case of the Old World, but with Middle-earth I could not bring myself to do such a thing, similar to how I couldn't intrude on the Star Wars setting's reality. This was partly my fault as I had come at the game wanting to adventure in the world but I still had the 'epic campaign' mindset, in that the players would expect their adventures to be world shattering. I simply couldn't do this with Middle-earth as it was far too dear to me and changing it in any way, even though it was just a game, just felt wrong.

The games were abandoned and the Decipher rules were discarded. It would be a long time before I would venture into Tolkien's world again.
Posted by Farsight Blogger No comments: