The press release for 'Those Dark Places' has been sent out and, suddenly the impending launch date is on my clock. The book is as finished as it's going to get and all that remains is for me to wait until it's out into the hands of gamers.

I will be talking about the game some more in this series of Designer's Blogs, talk about the kind of adventures I'm thinking about running, how the incredibly simple D6-based system works and how it all hangs together to become a playable game.

So, first of all - why did I write this game?

I'm a huge fan of dark science fiction thrillers. 'Alien' is my favourite movie of all time along with other classic of the time such as 'Outland', 'Blade Runner' and 'The Black Hole'. More recent movies such as 'Moon' have also been a massive influence, and I'm heavily inspired by computer games such as 'Alien Isolation', 'Dead Space' and the most recent 'Alien Breed' trilogy. These movies and games have a plethora of great big nasties to overcome but they all have something in common; their dark, claustrophobic atmosphere.

It's the aesthetic I love about these things; the design of the ships and locations, the oppressive and harsh environments and the sense that help isn't coming, that you're on your own and it's up to you to get the job done - or at least stay alive. Yes, the creatures and weirdness are excellent but the incredible level of atmosphere and reality these creations create and exude simply blows my mind. I had to take that feeling and translate it into a game somehow.

'Those Dark Places' is what I call Industrial Science Fiction; it's down and dirty, incredibly hands on and doesn't rely on fancy tech to help the characters get by. If a problem can be solved by a four foot powerwrench weighing thirty kilos then so be it. Players get their hands dirty, physically and mentally.

While there is plenty of scope for nasty aliens ruining your day, or genetic monsters getting all slasher on you, the game doesn't deal with those things directly. You'll not find rules for terrors in the dark, but there is always the hint of them being there, existing either physically or just in the insane ramblings of the broken mind of a deep space traveller who has allowed the void to get to them. Either one can be a threat and that sense of not fully knowing is what, I hope, gives 'Those Dark Places' the chance to offer something new to the gaming table. If players are not 100% sure of what is happening next, or if it's even real, then that's a level of uncertainty that can really enhance a gaming session.

The game system is incredibly simple and uses a single D6 for everything. It's a roll Vs target number system and there are three levels of successs. I'll explain more about this in another blog entry, but the system is easy to use and a player character can be created in less than a minute once you know what kind of character you want to play. More thought is put into the character's personality and role on the ship than scores and stats. This makes it easier to modify and add your own material so if you do want to add those monsters and aliens then you can do so with ease.

In my next Designer's Blog I'll talk more about the system and how it plays, and why I made that design choice for a storytelling game like 'Those Dark Places'.
Posted by Farsight Blogger No comments:

Osprey Games is delighted to announce that in November 2020 we will be publishing Those Dark Places: Industrial Science Fiction Roleplaying by Jonathan Hicks, with illustrations by Nathan Anderson.

Inspired by the aesthetic of iconic science-fiction thrillers such as Ridley Scott’s Alien and the Dead Space video games, this highly thematic RPG thrusts players into deep space; a grim, dark, claustrophobic setting that constantly hints at danger. A sleek ruleset keeps players focused on the story as they venture into shadowy corners of space that no-one has ever explored and face the unknown.

“I've written various articles, reviews, and interviews for the RPG industry for more than a decade, so of course I jumped at the chance to write a full game about my favourite genre,” commented author Jonathan Hicks, “I've always leaned towards rules-light systems so that the story takes precedence and the atmosphere is allowed to flourish. With Those Dark Places I hope gaming groups can take the simple rules and the evocative setting, run with it, and create their own stories of horrors in the stars... whether real or imagined. With Nathan Anderson's wonderful artwork and Osprey Games' excellent production values, I'm excited to see this come alive!”
Senior Games Developer, Filip Falk Hartelius, added that “Those Dark Places is a game dripping with atmosphere, capturing the frailty of human existence amidst the uncaring vastness of spaces. Whether you are deep in the political intrigues of a dystopian future or facing terrifying cosmic horror, Those Dark Places is constantly gripping, tense, and transporting.”
***
Space is a hell of a thing but you need to be sure that this is what you want. Like, what you really want. The idea of space exploration to further the frontiers of mankind is noble, but let's not kid ourselves – it’s really all about furthering the profit margins. There’s money to be made and out there is the place to make it, but you hear all kinds of stories… equipment malfunctions, strange discoveries, crewmembers going insane... You'll be out there in the reaches, alone, for months or years, breathing recycled air and drinking recycled water, with nothing but a few feet of metal and shielding between you and certain death.Are you sure this is what you want?– Crew Orientation BriefingThose Dark Places is a rules-light, story-focused roleplaying game about the darker side of space exploration and the people who travel the stars in claustrophobic, dangerous conditions. Starships, stations, and outposts aren't havens of safety with clean, brightly lit corridors – they're potential deathtraps, funded by budget-conscious corporate interests and running on stale, recycled air and water. The stars may be the future of humanity, but they are also home to horrors and terror the human mind cannot comprehend.
***
About Jonathan Hicks
Born in the historic city of Lichfield and now residing in Northampton, Jonathan Hicks has been at the gaming table since 1983, and has more than a decade of gaming articles, reviews, interviews, and designs across multiple genres under his belt.
About Nathan Anderson
Nathan Anderson is a freelance illustrator based in Michigan who has had an interest in sci-fi, horror, and fantasy since he was very young. Influenced by European comics, Japanese fantasy fiction, Medieval history, and retro arcade games, Nathan's clients include Gale Force Nine & Wizards of the Coast, Little Caesars, Laundry TV & the SyFy Channel, and more.
About Osprey Games
Osprey Games is the dedicated games division of Osprey Publishing (part of Bloomsbury Publishing plc) and publishes a wide range of wargames, roleplaying games, and board games. Launched in 2014, the company has produced an array of critically acclaimed titles, including Frostgrave, Bolt Action, Wildlands, Undaunted: Normandy and The Lost Expedition.
Posted by Farsight Blogger No comments: 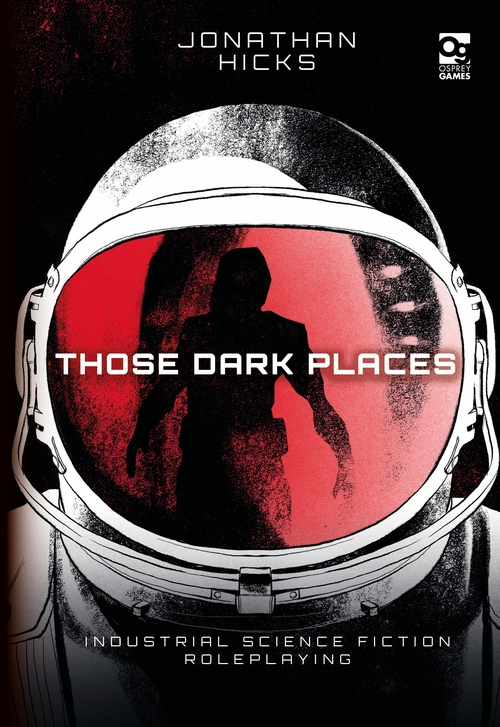 Kings of War the Roleplaying Game

'The roleplaying game for Mantic's epic fantasy setting: Kings of War. In a world of heroes, forge your own legend.

Kings of War is a fantasy setting of epic scope. Originally envisioned through the medium of a tabletop wargame, Pannithor has since been expanded with the Dungeon Saga board game and the Kings of War: Vanguard skirmish game. With Kings of War the Roleplaying Game, GMs and players will be able to explore this grandiose fantasy setting like never before!'

An age ago I bought the 'Kings of War' miniatures rules and had great fun with it. It was the game that got me back into wargames for a while and, while I didn't stick with it, it was the only other game since WFB that really stoked my passion for tabletop battles.

Of course, my thoughts at the time leaned to RPGing it, and I created some fast and loose rules to add on to the wargame to play individual heroes. The rules were published in the much missed Ironwatch fan magazine.

Now it has it's own full RPG and it looks excellent. I've downloaded the quickstart rules and what I've read so far looks great. I'm really looking forward to seeing the full game of this and what they do with the world the wargame created.