I was always really pleased with my quick 'n dirty D6 System conversion of Task Force Games' 'Prime Directive' core rulebook, that even used the book's own system and character sheet. It can be found in the free section of my website http://www.farsightgames.com/. It was simple and yet effective and, even though you'll need to locate extra rulebooks that are very old and out of print, it worked well.
This brings me to the original FASA game from waaaaaaay back in the midst of time, when hairspray was abundant and 18th century clothing and a white stripe across the nosebridge was the 'in' thing. Of course, I'm talking about the early 1980s. 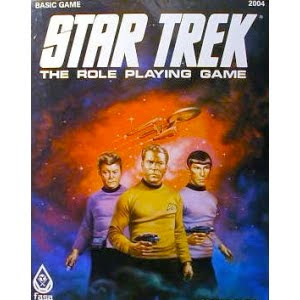 The copy I have is the Games Workshop Second Edition printing. It was a great little system, percentile based, and the characters you could create were given depth by having them develop through applying to Star Fleet, going through Academy training and then active service. The final character was fleshed out and easy to play, and whilst the damage of weapons of the era (the Original Series) was slightly over the top (one hit disintegrations!) the system was pretty fluid and fun.
I created a character for this back in 1989 but never played him. I might give this game a stab at some point.
Posted by Farsight Blogger 5 comments:

I now have the time to design again!

I’ve designed a few RPG systems in my time. Some worked well, some crashed in a spectacular fashion. I’ve always enjoyed designing and writing them, though.

I’ve had a mind to design yet another system but, to be honest, I didn’t want to create a whole new dice mechanic for people to (yet again) learn. This time I’m thinking of creating a system that doesn’t require a whole load of new rules and yet has much in common with existing games systems.

My first thought was a variation of the D6 system, which I love, and then maybe a version of the Warhammer Fantasy Roleplay rules, as used in WFRP 1st and 2nd Edition and the 40K games. I do like the percentile system, but at the same time I wanted to go even further back, to a system that held some nostalgie for me.

I’ve gone right back to the old D&D system and I’m looking at the old ways of doing things; 3D6 for stats, a D20 for task resolution, that kind of thing. The stats really are that – STATS. Strength, Toughness, Agility, Teaching and Social. It’s a cheap gimmick but, hey, it’s all embryonic at the moment. I’m looking to do a generic sci-fi game, a kind of D&D in space, but we’ll see. Early days yet.
Posted by Farsight Blogger 1 comment:

Why I'm shying away from complicated RPG systems

I began to hate complicated systems years ago when I had to spend six hours creating a character for Rolemaster under the watchful eye of the GM. When the game started I was killed in the first twenty minutes - I was backstabbed by the GMs fucking NPC assassin! All that time in character creation, wading through books and choices and complicated crap that would make no difference to the character anyway and I don't even get to experience the very reason why I'm in the hobby; playing an RPG.

After that I was loathe to spend any longer than half an hour in character creation. That spread on to the rules themselves. Now I just want simplicity. I want to be able to sit at the table for a four hour session and be able to have the characters ready in the first 30 minutes, spend the next 30 minutes making sure everyone is up to speed on the basics of the mechanics and then the next three hours playing an actual game. Then we're sorted for the campaign.

I don't want complicated character advancement, either. Got points to spend? Levelled up? Right, end of session, ten minutes to spend/choose. That's that, ready for the next game.

I'm over rules - I just want to play and be played!
Posted by Farsight Blogger 2 comments:

BRAGGART – A game of heroes, lies and unfortunate fish. 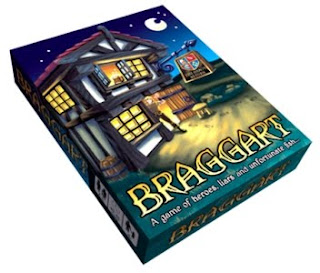 So, the other day , While wearing nothing more than my boots and a smile... I got into a bar fight with... a party of drunken dwarves... and now barmaids all over town are unable to resist me!

What? Are you calling me a liar?

And so it goes with BRAGGART. A simple, fun and funny card game designed by Kyle Daniel and released through Spiral Galaxy Games. Imagine that your roleplaying characters have had a hard day’s adventuring and they all retire to the local tavern for a drink. As the beer flows their tales of derring-do get even more wild and outlandish, until they’re competing with each other for best boast. The more outlandish the boast the bigger the score but beware – being called out as a liar will not only reduce your points but also make you look foolish!

So how does this work? Well, before we get into that lets have a look at what you get in the game – a nice box with some excellent artwork which contains 120 full colour illustrated cards and a fold-out instruction manual. It’s very small, small enough to go in a coat pocket or in your bag with your gaming manuals. The artwork and the quality of the cards is great and it’s all done in the style of an old tavern with foaming tankards and wooden boards. It’s a lovely looking game, simple but well presented.

To play the game you’ll need 2-6 players (and it is one of those games where more players is better) and about half an hour to an hour. The manual suggests that the person who starts the game is decided in this way – ‘Argue amongst yourselves to determine who has performed the most impressive feat during their life. That player will start the game...’ After this real-life moment of bragging the game mechanics begin. The player starting the game is given a ‘My Round’ card. Each player is dealt four random cards. Each round consists of two phases: Draft and Boast. The Draft phase consists of placing as many cards as there are players on the table face up. The player with the ‘My Round’ card chooses what card they want first, followed by the other players going clockwise. The Boast Phase starts again with the starting player either going to the Bar or making a Boast (as you can see, the entire game is fashioned after drinking in a tavern – everything a player does is based around what people get up to in pubs). Going to the bar means you can draw another three cards, or you can make a Boast.

Ah , yes, the Boast. This is where the name of the game comes into play. You have four cards to play; 1 Scene, 1 Deed, 1 Foe and 1 Result. You can just play the Deed and Foe cards, if you want, but Scene and Result cards get you even more points. So, using the example at the beginning of the review, I played 1 Scene card (‘While wearing nothing more than my boots and a smile...’), followed by 1 Deed card (‘I got into a bar fight with...’), followed by 1 Foe card (‘a party of drunken dwarves...’), and topped off with 1 Result card (‘...and now barmaids all over town are unable to resist me!’). The cards total points, and the bigger the points the bigger the boast. There are 92 cards in total that are designed to follow on from each other; this enables players to string together all kinds of tall tales. Other players can play ‘Liar!’ cards and accuse you of making stuff up, enabling them to exchange one of your cards for something worth less and ruin your story. So, if another player had played a ‘Liar!’ card, they could have changed ‘...and now barmaids all over town are unable to resist me!’ to ‘...and then I hid in my house crying!’, losing me points and making me look foolish. There’s also Ploy cards to be played that enable players to take cards from other player’s hands.

So, during one game I’ve had such boasts as ‘In the Queen’s bedchamber... I was forced to pose for a portrait with... the foulest of all dragons... and now I’ve been offered the post of King’s champion!’, and ‘While using forbidden sorcery... I was captured and left at the mercy of... a tribe of peaceful fairies... and then I hid in my house crying!’. The first boast got me some points. The second one, not so much.

Players are encouraged to ‘roleplay’ their boaster and speak out their deeds as they are written on the cards, call out their played ‘Liar!’ cards and generally get into character. I’m a roleplayer and I’d love to do an evening’s gaming and round it off with a game of BRAGGART, and have our characters sat in the tavern swapping stories. After a day’s adventuring what better way to celebrate it than to go down the pub and boast about your exploits.

This is an excellent, fun little game that is great at helping to kill time before or after a session. It’s a great pick-up-and-play game that’s easy to get the hang of and is definitely better served by multiple players. Waiting for the night’s gaming session to start? Whack out BRAGGART and have a blast. On a long train journey? BRAGGART! Waiting in the airport? BRAGGART! At the convention, between games or having a break? BRAGGART! It’s great because it’s involving, enjoyable and incredibly portable. It’s great for roleplayers but is just as good for someone looking for a fun, quick game of something different. The boast combinations are genuinely funny and there are plenty of cards to make sure that they stay original and fresh, even if the same cards come up every few games. A downside may be similar combinations cropping up if the game is played regularly, with exploits becoming too much like a previous game and losing that original humourous punch. An expansion would be more than welcome, some kind of pack of extra cards to add more possibilities and wild boasts to the mix. There’s plenty of fun to be had with this game, mind you.

BRAGGART is well designed and well presented and fun to play, with excellent and atmospheric artwork that suits the game perfectly. Highly recommended.

You can find out more at www.spiralgalaxygames.co.uk
Posted by Farsight Blogger No comments: