The peeps at Garblag Games gave me the chance to run amok on their channel with my first full public playthrough of the game. It'll be on their YouTube channel soon, but if you can't wait then you can check out the stream on their Twitch channel.

Many thanks to the guys for their time and enthusiasm, and if you like these videos they are a fantastic channel to subscribe to as they've got some amazing game sessions under their belt! 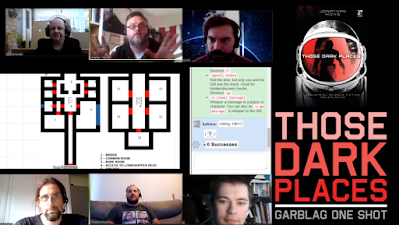 As lockdowns increase again I'm finding it hard to get a group together for a review play, so join me as I unbox the new game from Themeborne, 'Escape the Dark Sector'.
Posted by Farsight Blogger No comments:

In this blog I'd like to talk about the effects of Pressure on the characters, groups and the game overall.

Pressure is a game mechanic that tries to emulate the effects of mental stress and emotional hardships that the PCs may have to face. Depending on your stat choices some characters are more susceptible to the rigours of space exloration than others, but it's not the immediate effects that may cause problems...

Characters have a Pressure Bonus which is added to a roll, and the higher the better. Failed rolls result in your Pressure Level going up and this can lead to Episodes; you may be tremendously shocked or terrified and that will negatively affect your rolls, or you'll be rooted to the spot, or you'll go into a violent frenzy as you try to get away from the horror. However, this Pressure Level goes up and it might not trigger an Episode right away, so the higher it goes the more chance you'll have of triggering a response and the worse it'll be. It's like you've been bottling up your fear and at some pont the pressure will be so great you'll explode in a far worse way than if you'd reacted to it sooner. This can not only affect the individual player it can create problems for the group as they have to deal with a weakened colleague, a catatonic crewmember or a terrified violent friend.

However, it doesn't end there. These Episodes can have ongoing effects. Once the player has had an Episode they write down what triggered it, and if they are ever in a situation similar then the memories of the initial shock can come flooding back and have a negative effect on their rolls. In Those Dark Places, players don’t just make the rolls and suffer the consequences; they're encouraged to role-play it! If the situation means your character has to face their fear, then make sure it becomes part of the story you’re telling.

If characters do face their fears they can slowly overcome them, and successful rolls means reduced negative modifiers. The memory of the shock will never go away, but they will learn to perhaps accept it and with support from their colleagues they can get through it. This means that incidents such as these are not limited to a single session or adventure; perhaps a few weeks of play down the line the situation arises again. In every case the players are encouraged to roleplay it out and not just state that they have modifiers that may affect their performance.

About to be sent into a narrow air duct? “No way, man! You ain’t getting me in there!”

Being told to get into a leaky spacesuit and go outside the ship? “You’re kidding, right? I don’t care that I’m the only one here that can fix it, get someone else!”

Have to dive underwater? “Do you not remember what happened at the refinery? I’ll wait here, thank you very much!”

Pressure Levels can be reduced between adventures with R&R and time in a LongSleep chamber, but during the game the players will have to suffer the possible effects of Episodes and the repercussions of pushing too hard and too far against the terrors in the darkness.

A quick video of me opening boxes with Alien RPG stuff in them and trying really hard not to get too overexcited about it.

Subscribe for some reason! Share the vid! Smash that like button! I have no idea what any of that means! Why would you smash the like button, you might break it! Just press it carefully! A tap will do, just calm down!

The Farsight Podcast Episode 8 - Dune and my RPG hobby

In this episode I have something of a rant about my love for Dune, and what I would expect from roleplaying game session (most of it unrealistic and really selfish).

Thank you to Ryan Hicks for the awesome intro music! 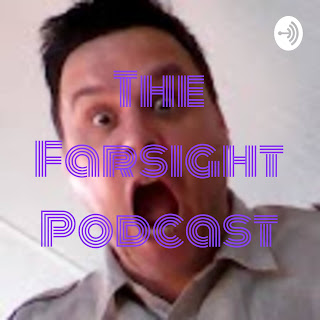