It's official. I'm in love with Eclipse Phase. 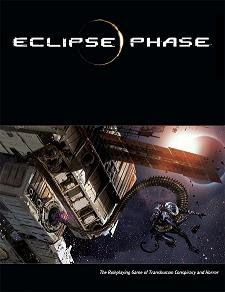 I love the idea, the atmosphere and the rules system. The thing is, it doesn't do exactly what I want it to do...

I've been getting back in to my science fiction horror recently and enjoying it immensley. I think it's because I'm getting all excited about Ridley Scott's 'Prometheus' movie that comes out next year. I remember those horrible feelings of terror, of the fear of the unknown, when I was a boy watching 'Alien' and 'The Thing'. This kind of horror these days is done for the shock value, the kind of nervous jump and disgusting visuals we now come to expect. Yeah, I know, The Thing was pretty damn visceral and gory, but the story and the characters held up well in between the moments of fleshy explosions and the horror was palpable. Alien even more so.

So, I'm wondering what system would I use to run a game such as this?

Eclipse Phase would do it, but the horror level isn't exceptionally well represented in the game. It's there, but it's not the forefront of what the game is about and the whole morph/resleeve coolness would overshadow the terror.

Call of Cthulhu is perfect - the Sanity rules alone help, but the far-future concept isn't really covered. Sure, there's CthulhuTech, but that doesn't appeal. Maybe a combination of classic Call of Cthulhu and Basic Roleplaying to get hold of the sci-fi aspects of the game system?

My next port of call are the Warhammer 40K RPGs: Dark Heresy, Rogue Trader and Deathwatch. The thing is, I'm looking for PCs that are normal and out of their depth, whereas 40K PCs will solve any terror situations by either calling in an orbital strike or standing behind the guy with the heavy bolter. Great games, but not sure about how much of a threat the terror could really be in the face of explosive bullets.

Of course, any of these games - or any game - can be tweaked to make the setting work but all things considered I think I'll stick with the tried and tested system; Call of Cthulhu. The 6th Edition has details of the modern day in it's system so, adding a few extra skills to reflect the sci-fi era the PCs are in, I can make that work and get my own seven man crew on an interstellar commercial towing vehicle in no time.

'Oh, God, it's moving right toward you! Move! Get out of there!'
Posted by Farsight Blogger