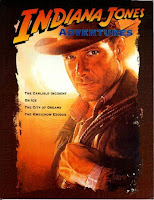 This is the first I've heard of it! All I was aware of the was the TSR game from the 1980s and the dicey West End Games Masterbook System game from the mid 1990s. Being a huge Star Wars D6 fan I'd have pulled my own teeth out to own a copy of this game. What the hell was West End Games thinking? As a D6 and a WEG fan that must have been some pretty shitty advertising for it.

When this came out, WEG were already showing signs of cracking. The Star Wars line was starting to get a bit stale, and the Masterbook system hadn't been very well recieved along with the D6 System release not being as good as they would have wanted, what with being a bit of a mess of rules and very little clear instruction for none-D6 players or details on campaign worlds.  They had the Star wars and Indiana Jones licences, and instead of using the D6 system for both they used the established system for Star wars and the cumbersome (and most definitely not pulp adventure-friendly) Masterbook system for Indiana Jones.

Then they bought this out, to introduce D6 players to the Indiana Jones way of doing things, and also including a conversion system to swap your Masterbook stats over to D6. I never played in the WEG world of Indiana Jones because of my dislike of the Masterbook system - I used to use Call of Cthulhu for my Indy-inspired adventures - but if I'd known this baby had been around I'd have played the living shit out of it.

As a huge Star Wars D6 fan I'd have snapped this up faster than you could snatch a golden idol, and I'd have flooded WEG with money to get hold of the books as they came out. Star Wars was waning, and what else does the average Lucasfilm fan love? Indiana bloody Jones, you idiots! You could have kickstarted an entire new Expanded Universe for Indiana Jones, the same way you did for Star Wars back in the late eighties!

But what license did they support?

God almighty, a missed opportunity or what?!?

If anyone has it, I'll quite gladly swap either my copy of Mongoose Traveller or Cthulhu Dark Ages for it. Send me a message.
Posted by Farsight Blogger