Being a huge fan of the D6 system, primarily for it's ability to be incredibly adaptable and the fact that it's a fast, intuitive system that lends itself perfectly to cinematic action-style gaming, I've played it in many settings and genres. None suited it more than the pulp science fiction setting, especially Star Wars. The first edition of Star Wars: The Roleplaying Game is my favourite. 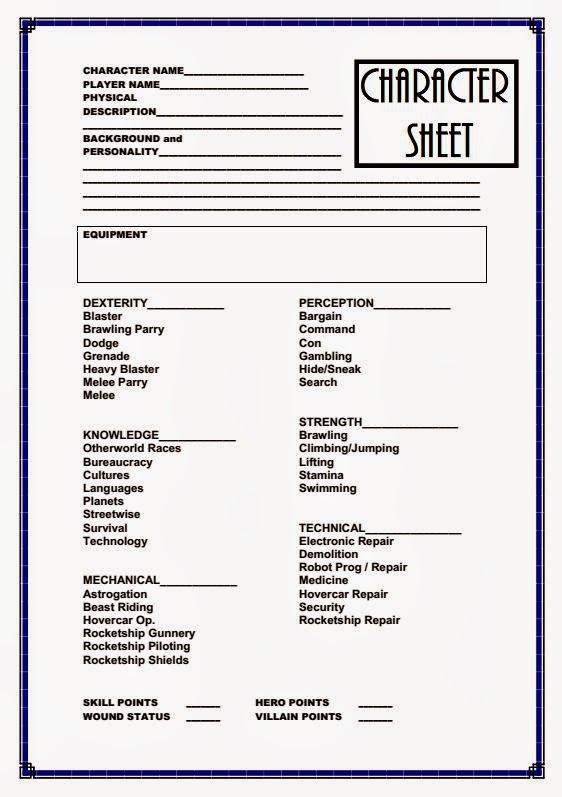 It was a simple case of swapping out the Star Wars references for a generic, 1930s version. So, 'Starship' Piloting becomes 'Rocketship Piloting', 'Comp. Prog/Repair' becomes 'Electronic Repair' and so forth. 'Force Points' are now 'Hero Points', and 'Dark Side Points' are 'Villain Points', and both are used in exactly the same way as their Star Wars counterparts.

Everything else then stays the same; 'Star Wars' was inspired by the pulp serials, after all, so the game is perfect for it, and it's a very simple case of changing the references in the rulebook.

If you want a PDF of this character sheet you can download it from here.

I'm hoping to get a game of this going later in the year. If anyone else has a stab at it using this character sheet then let me know how you get on.
Posted by Farsight Blogger