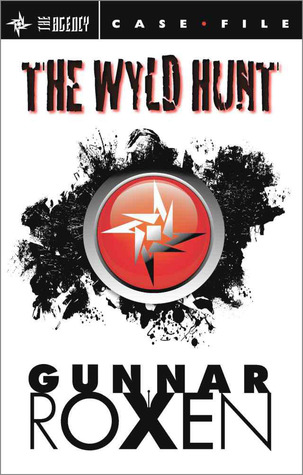 'The Wyld Hunt is an explosive science fiction detective thriller set in a futuristic London.

When Agents John Aries and Lovelace takes on the search for a missing wealthy businessman it becomes a fight for survival and his very soul on the streets of London. With time running out can they stay alive long enough to solve the case?

Aries, his partner Agent Lovelace, the tough ex-street cop, and the enigmatic and dangerous femme fatale Clarice, are pulled into a maelstrom of politics, intrigue and corruption in a case that will take them from the peak of London’s power structure but to the darkest depths of the human soul.'

Gunnar Roxen’s first book of ‘The Agency Case Files’ takes us through a science fiction London where the Echoes (humans with psychic abilities when, if used, takes them closer to death) and Slivers (modified humans with increased strength and abilities but a weakness towards sunlight) live alongside other types of modified humans.

Battling their way through this world of both science and the supernatural are agents Aries (an Echo) and Lovelace (a Sliver) , who are paired together to investigate the death of one Massey de Sargon. The demise of this individual leads them into the dark underbelly of London and with both guile and violence they must confront dangers as the truth unfolds.

Aries and Lovelace are two intriguing characters and are well defined, and although we learn much about them in this book they are two people I’m looking forward to reading more about. Although there is no real distrust at their initial meeting it makes for an interesting story as they learn more about each other and how they fit into the overall story. Aries especially is a well-defined individual as his life-shortening power makes for an almost tragic figure.

The story moves along at a nice clip and has some very good action scenes, not brutal but still quite violent, and the intrigue is very involving. It took me a while to get a handle on the setting, with the science, supernatural and religious threads all thrown at you in short order, but the casual everyday attitude the characters have to it makes it feel very comfortable, almost natural, and that helps you ease into it. Once you get your head around the setting and what it’s all about you can get into the meat of the story.

And it’s a very good story. It may feel like the usual ‘innocuous death snowballing into a massive world-busting story of massive proportions’ type of plot, but the nature in which you get to the conclusion and the adventure you experience with the characters is worth it.

A well-written book of action and investigation with interesting characters in an intriguing science fiction/supernatural setting. Recommended.

If you like this book, or settings like this in general, then I can also recommend the tabletop roleplaying game of the world that the Wylde Hunt is set in: ‘Broken Shield’ from Chronicle City.