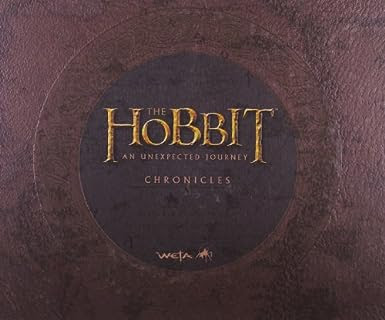 The Hobbit: An Unexpected Journey, Chronicles: Art and Design is a busy little book. Every page is crammed with so much art there's hardly a spare millimetre of blank page anywhere so in terms of pictures per pound this is already a savvy purchase. Anyone who has bought any of the concept art books for Peter Jackson's original LOTR trilogy will be pleased to see that the layout is much the same as those other titles and will be even more pleased to see a continuation of the art style as Alan Lee and John Howe are back in charge of art direction. Fans will no doubt be thrilled to see their distinctive sketch art adorning a Tolkien adaptation yet again.

The character and monster designs, as well as the environmental concepts, are all very inspiring and I can't get enough of the attention to detail. I would even go as far as to say that the character design, in particular, is superior to the original trilogy work, especially the works of Nick Keller and Paul Tobin. Anyone out there who needs some inspiration for a character in a fantasy setting would be well satisfied with this book. Another name I will be looking out for in future is Gus Hunter whose conceptualisation for the battle between Dwarves and Orcs from Thorin's past I would pay handsomely to own as a framed print.

As you would expect from a special effects house such as Weta there is a great deal of attention to detail and this is well represented in the book. There is enough weapon and armour designs to fill a virtual armoury fit for an army and any little tools, gadgets and props carried by the characters are included.

There are, however, a few niggling gripes. Firstly the book has been produced in landscape format, rather than portrait so it doesn't sit so well on the shelf next to my other books. I would have appreciated it if the book had been made like the other LOTR concept art books, not just for the sake of my shelving aesthetics, but also so that it fit better with the books that had come before. As a lover of art I don't often ask for stagnation in design and production but as a collector I appreciate continuity.

There is also a fold out recreation of Thorin's map, attached to the inside front cover and attached to the back cover is Bilbo's burglar contract. Both are nicely made and stylish but they aren't perfect. The map has the invisible writing, visible only under the correct moonlight, which has been done with glow-in-the-dark lettering but sadly it is clear as day in normal daylight. Do I expect too much? Maybe. Do I know anything about producing luminous lettering on a stylish Dwarven map? No. But was it the first thing I thought when I saw the map? Yes. Which is a shame. As for the burglar contract it has been made a little too small and is difficult to read. Not impossible, just not easy. Again, a quick caveat; You might have the eyes of a hawk and therefore not have any difficulty reading the writing. I, sadly, do not and therefore do. However it is worth stating that it's nice to see them at all.

So who could possibly want to buy this book? This hardly needs stating but fans of Tolkien will eat this up and love every second of it. Lovers of concept art and fantasy art will also fall in love with this book, as I have.
Posted by Farsight Blogger