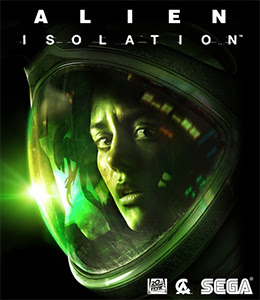 I've covered a few console and PC games after they were released but I don't usually big them up beforehand, but there's a game coming out that I am incredibly excited about and my impatience for it is starting to make me dribble.

A L I E N: Isolation is coming.

My disappointment with the incredibly lacking ALIENS: Colonial Marines is well known and upon hearing about a new ALIEN game in the works I wasn't exactly enamoured. But, after reading and watching the developer diaries and trailers I've slowly come to realise one thing; this could be the ALIEN game I've been waiting for.

The developers have gone back to an analog, pre-sleek n' swish flatscreen future and made everything clunky, grimy and dirty, and that element alone makes me more than excited for this game. The entire game reeks of the original Ridley Scott movie so there's no 10mm explosive-tipped standard light armour piercing rounds being blasted from a M41a Pulse Rifle here - just a single killing machine and a space station full of twitchy, terrified people... and very few resources. It's survival horror at it's best.

Oh, and if you get it on pre-order you can play on the Nostromo. As one of the original crew. I shit you not.

Everything you'll need to get you in the mood for some classic sci-fi horror is below. Knock yourself out, and keep October free in your gaming diary.