It’s December 2014 and there’s a lot of excitement bouncing around the internet at the moment; the Star Wars Rebels cartoon is going great guns and the first teaser trailer for Episode VII has hit the airwaves and created an explosion of buzz and anticipation. Now is the time to get involved in the Star Wars tabletop roleplaying game from Fantasy Flight Games and immerse yourself in the Star Wars universe.

The Age of Rebellion Beginner Game follows the same format as the earlier Edge of the Empire boxset. It’s a step-by step instruction manual for new gamers to the hobby, and serves as an introduction to the new Age of Rebellion rulebook for existing players. With the special dice for the game, cardboard counters (including four for the PCs in the boxset and two extras for the PCs you can download from the FFG website), counters and chips, the rulebook, adventure and a map, you get quite a lot in the box. In total you get the following: 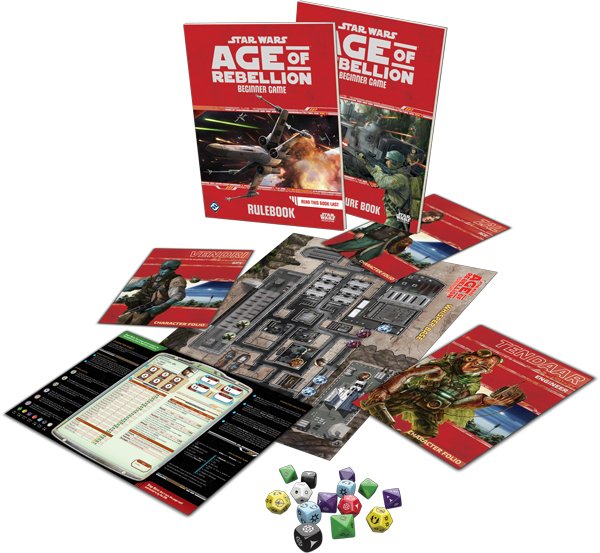 As with the Edge of the Empire boxset you get a decent adventure that should last a few sessions, along with it’s downloadable follow-up ‘Operation Shadowpoint’ to stretch that out, but you don’t get a lot of leeway with the adventure. It really is a set of linear routes and choices that depend on the PCs choosing rather specific outcomes to further the story and doesn’t leave much room for improvisation. That’s fine for a new group who are learning the ropes, but for an experienced group and GM this might be a bit frustrating. Any experienced group worth their mettle should be able to make something of it.

This isn’t a complete game by any stretch of the imagination. Players will find the PCs useful in the adventure provided and may even get some use out of them in other adventures, but the boxset doesn’t really allow for any extended play outside of the limits of the box. Existing gamers may want to skip this and go straight on to the main Age of Rebellion rulebook but completists and collectors, like myself, may want to get their hands on this to complete the set. Regardless, it’s handy for the extra dice, the map and the counters, and the PCs come in handy as templates for NPCs and quick, off-the-cuff characters in case the gaming group is in need of a speedy retainer.

Its basic purpose is to act as a gateway to the full Age of Rebellion rulebook and it’s another avenue for new gamers to get involved in the Star Wars RPG. If the smugglers and ne’er-do-wells of the original Edge of the Empire didn’t attract them, then the allure of fighting as rebels in the Episodes IV-VI setting will surely do so. The clear instructions and step-by-step guidelines make this an excellent introductory game and in that it’s purpose is clearly attained; new gamers will get a lot of fun out of this and get a clear understanding of how the game mechanics work. It will take a lot of other games outside of the boxset for new players to fully appreciate the hobby and the experience of joining an existing group and learning the game hands-on will never be replaced, but this a fine product with excellent production values that will provide a few sessions of fun and frolics, and may even prove useful after it’s initial use.
Posted by Farsight Blogger