Big News today! Firstly you can now download the v1.3 Conan RPG Playtest Pack which has several changes we think you'll like. Remember to tell friends to sign up to playtest at   www.modiphius.com/conan

We can now unveil the art of world famous Conan artist Sanjulian(Conan Ace Paperbacks, Vampirella, Eerie, Creepy) for the Conan Roleplaying Game. It's actually a wrap around cover and you'll see the full art soon. 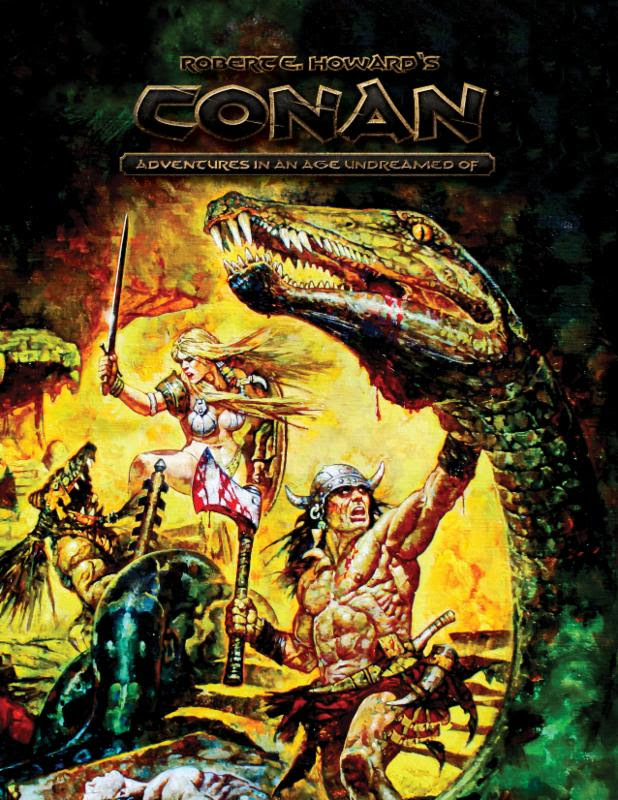 Sanjulian approached us and loved the fact we were bringing an authentic Conan roleplaying game to the tabletop. His passion for Howard's barbarian is unparalleled and it shows in this classic piece. We're honoured to have such incredible talent contributing to the series of covers.

Jeff Shanks wrote the following brief for the cover (this is just the summary):

"This painting would conflate and combine several different scenes and elements from "Red Nails." The basic composition would have CONAN and VALERIA inside a throne room in the ancient lost city of Xuchotl surrounded by and fighting enemy TLAZITLAN warriors. Behind them is a black ebony pillar with hundreds of reddish copper nails driven into it. Entering the scene in the background is the insane wizard TOLKEMEC with several zombies/mummies/undead behind him. Other elements would include THE CRAWLER, a serpentine monster, and TASCELA an evil but beautiful sorceress/witch who would be looking at the arrival of TOLKEMEC with fear and loathing."

We think Sanjulian nailed it (though for design reasons Tascela didn't make it in to this image) and look forward to more of his work later on! We'll soon be unveiling the fantastic cover by British artist Carl Critchlow! We'll leave you with Howard's description of the scene!

"The Tecuhltli, recovering from the first stunning shock of the surprise that had swept them back into the throne room and littered the floor with their corpses, fought back with an equally desperate fury, while the door-guards from the lower floors came racing to hurl themselves into the fray. It was the death-fight of rabid wolves, blind, panting, merciless. Back and forth it surged, from door to dais, blades whickering and striking into flesh, blood spurting, feet stamping the crimson floor where redder pools were forming. Ivory tables crashed over, seats were splintered, velvet hangings torn down were stained red. It was the bloody climax of a bloody half-century, and every man there sensed it."

"These crashed into the fray with the devastating effect of a hurricane plowing through a grove of saplings. In sheer strength no three Tlazitlans were a match for Conan, and in spite of his weight he was quicker on his feet than any of them. He moved through the whirling, eddying mass with the surety and destructiveness of a gray wolf amidst a pack of alley curs, and he strode over a wake of crumpled figures."

"Valeria fought beside him, her lips smiling and her eyes blazing. She was stronger than the average man, and far quicker and more ferocious. Her sword was like a living thing in her hand. Where Conan beat down opposition by the sheer weight and power of his blows, breaking spears, splitting skulls and cleaving bosoms to the breast-bone, Valeria brought into action a finesse of sword-play that dazzled and bewildered her antagonists before it slew them. Again and again a warrior, heaving high his heavy blade, found her point in his jugular before he could strike. Conan, towering above the field, strode through the welter smiting right and left, but Valeria moved like an illusive phantom, constantly shifting, and thrusting and slashing as she shifted. Swords missed her again and again as the wielders flailed the empty air and died with her point in their hearts or throats, and her mocking laughter in their ears."