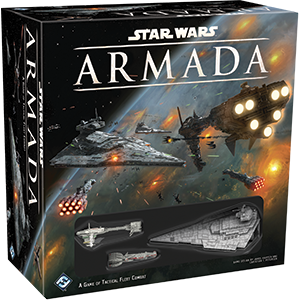 The UK Games Expo was, once again, a massive success this year. I attended it on the Sunday and had a great time, and with my wife Lisa and son Bruce in tow we hit the halls of the Hilton Metropole Hotel.

There were plenty of amazing stands there and I got myself some great bargains, but there was one stand I wanted to visit on behalf of Jedi News and that was the Fantasy Flight Games stand, and we found it in one of the major halls. We timed it just right; there were several demonstration games going on and plenty of people milling around, but we were lucky - the one game we really wanted to try was about to start and we dived in quick before anyone else could grab a seat. With a huge smile me and Bruce sat down to play Star Wars: Armada.

This game of great hulking capital ships is something I’ve been looking forward to for a while. The models looked great - the Destroyer, the Corvette and the Nebulon-B ships, as well as the fighters, were great to look at and would make great models in anyone’s collection.

At first I was looking for the similarities to FFG’s X-Wing Miniatures game, but I soon realised that the games were quite different. X-Wing relies on fast thinking and immediate turn-based responses, to reflect the quick fights between smaller ships, but these things required forward planning. We had the Imperial Destroyer and huge lumbering behemoths such as these do not turn on a shiny credit. We had to think a few turns ahead, decide on the strategy we would need to defeat these troublesome Rebels and hope that the decisions were the correct ones. 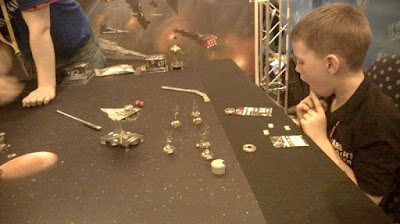 There are a lot more rules to absorb in this game, moreso than X-Wing for sure. What may have taken twenty minutes to resolve in an X-Wing fight might take up to an hour with Star Wars: Armada. Once you commit to a maneuver there are several rounds of lumbering turbolaser violence, but the initial assumption that the turns may be a little boring is cancelled by the sheer amount of punishment these ships give out, and the split-second decisions you make for your fighter squadrons. The game never feels boring and there’s plenty to do as the most powerful warships in the galaxy slowly rumble across the table and chip away at each other. Still, this was just a few turns I played and I have yet to spend a lot of time choosing my orders and plotting my assault. Will the game have legs? Only long-term games and the expansions will tell. 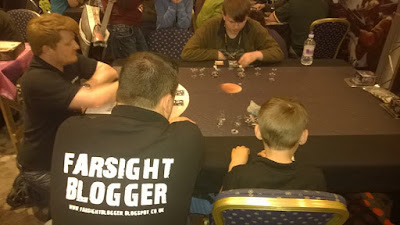 The few turns we got to play were good fun, but I feel that a proper blast at the game is in order. And when I say blast, what I mean is an entire afternoon/evening of getting to grips with the system and the dice, and putting these ship up against each a few times, just to iron out any rules kinks.

As with other FFG products, Star Wars: Armada is a collectible game so be on the lookout for plenty of ship expansions. The table is going to look absolutely epic with a few capital ships slowly moving into a better position to rain lasers on each other.

It was a lot of fun, and I’m looking forward to getting my teeth into it proper.
Posted by Farsight Blogger