I've been having some amazing fun recently with Call of Cthulhu - the Friday night campaign we have on the go at the Lunar Games Society in Lichfield is going at full steam and, as the GM, I'm doing all I can to keep the story moving while at the same time making sure that the players are having fun. As this is a new group and this is our first campaign together, there's also a large part of me trying to impress them all with what I've learned over my many years of gaming. Hopefully they're having as much fun as I am.

I'm a massive fan of the Call of Cthulhu RPG - we're using 4th Edition right now - but there's always going to be a little voice in my head pushing for adventure and pulp-action excitement. I try to reign myself in when I hear the Indiana Jones march raging in my head, and as much as I'd love to have the group get into running gun battles or punch Nazis in the face, I've got to try and keep it in the reality of the setting.

It's not just that - the rules of Call of Cthulhu don't lend themselves well to cinematic action. So, I've gone back to the games system that I know will serve me well; the D6 System.

The one I use is from the first edition Star Wars RPG rules; it's fast, intuitive and easy to run. As well as being player friendly it's simple enough to grasp quickly yet detailed enough to create some properly fleshed-out characters. I ran a successful Star Wars campaign with it from 1987 to 1996, so that's a win in my book.

I want to do the action adventure thing, with treasure hunting, tomb raiding and villain bashing, and after playing the PS3 'Uncharted' games and having a blast with Nathan Drake, as well as the new 'Tomb Raider' games and getting into some serious shit with Lara Croft, I'd like to set it modern day and include secret societies, government agencies, criminal organisations and rogue military nutjobs, all taking place in the far corners of world. There's a shadowy world of secrets and lies, and history can make people very rich and powerful...

So, I've knocked  up a basic character sheet, I'm going to flesh out the background a bit more and I'm going to suggest that the players play as fortune seekers - mercenary treasure hunters who fall foul of organisations both official and unofficial in their search for that big score. Mix some modern-day dungeon bashing with some grudging heroics and I think we've got ourselves a campaign. 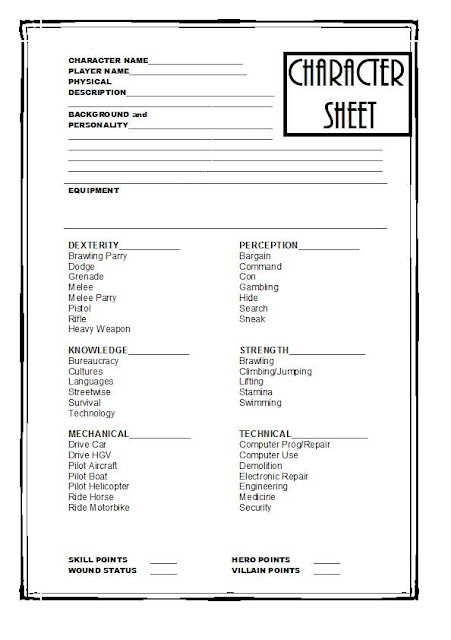