Dark Naga Adventures have been giving us entertaining adventures for our RPG needs since 2016 - 'The Lost Temple of Forgotten Evil', 'The Buried Zikurat', 'The City of Talos', 'Confronting Hastur', and soon 'Carcosa'.

I threw a few questions at Kevin Watson, the owner of Dark Naga Adventures, to find out more.

Welcome to Farsight Blogger! Please tell us a bit about yourself.

I’m Kevin Watson, the owner of Dark Naga Adventures. I’m 48 and have been gaming since I was 10. I live in Memphis TN, with my wife and a pair of dogs.

What got you into the wonderful world of tabletop gaming?

It was something creative some of my school friends wanted to explore. We ended up in a rotation where every other weekend we were at one of our four houses from the close of school Friday until after lunch Sunday, pretty much playing the whole time.

What made you start Dark Naga Adventures?

It was the intersection of the ideas I had been creating since I started DM’ing at 11, the OGL, an edition I wanted to write for, and the publishing and crowdfunding platforms necessary to execute the
ideas. Publishing in the TSR era was nearly impossible. Mostly due to the lack of resources and distribution. The first editions under the OGL didn’t appeal to me due to more rules complexity than I enjoy. I ran games, but I didn’t want to write for them. When the fifth edition was published, everything converged. Kickstarter and OneBookShelf solved the remaining missing pieces: resources and distribution platform.

You've got four adventures already out there and a fifth,'Carcosa’, due soon. What are your design processes?

It is very important to me that the draft is in really good shape from a creative perspective (content editors help with clarity and logic of a document). This removes a big wild card from the process before backers ever pledge on the project. It seems so many projects spin out of control because they run the Kickstarter before they have a workable draft, and the myriad of things coming at them after the funding period ends distract them from making solid progress. To help manage this risk, I do things in a different order. It makes me more comfortable and that seems to spread to backers as well. 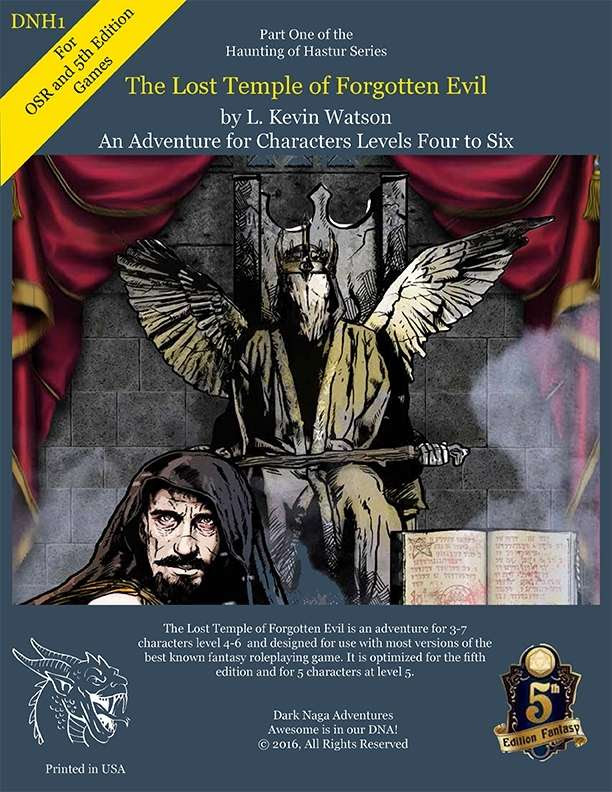 What makes Dark Naga Adventures stand out from the rest?

I try to write the adventures I don’t see in the market today. Personally, I am tired of 'combat, combat, skill challenge, combat, done' linear adventures. I love the open, sandbox adventures from the TSR era of Dungeons and Dragons. I write nonlinear adventures and most conflicts can be solved with or without violence. In most cases, this decision can be made for each encounter/conflict.

You release your adventures for 5e, Pathfinder and OSR games. Do you have any plans for other systems? What is it that attracts you to the D20?

I dropped Pathfinder from the conversions after DNH2 – The Buried Zikurat, the numbers just weren’t there. I suspect the lack of PFS compatibility was a factor. I keep coming back to the d20 games because they feel like home. I don’t find the fifth edition to be a hindrance to an exploration or interaction heavy session. I don’t feel any system prohibits roleplay. I know many do see certain rulesets favor or inhibit roleplay. I just don’t see it. Maybe I’m missing something. I’m open to converting to other systems. I just don’t know where the interest lies.

Are there any plans for adventures in other genres, such as horror or sci-fi?

I have an idea that I plan to develop for Top Secret: New World Order, and an eight-part series for Metamorphosis Alpha. The Top Secret idea is based on something that happened to a school I worked for, mixed with some current trends. The Metamorphosis Alpha idea involves a different generational ship, with a different mishap, and a series of adventures that take place over four generation of party members as the ship becomes more and more troubled from the mishap and the subsequent damage. Each stage of decay will be explored over a pair of adventures. Early successes and failures could impact later generation conflicts.

What else can we expect to see from Dark Naga Adventures in the future?

When the Haunting of Hastur series is completed, I am developing a fifteen-part complete campaign, one that might include some separate setting material. It takes the party members to a previously unknown continent for the bulk of their progression from level 1 to level 20.
Posted by Farsight Blogger