My MERP character Tere Swordsong and 'Against The Darkmaster'

So, Tere Swordsong. He's my favourite ever player character

I created Tere as a Scout for MERP, the original ICE boxset. He was good with a sword and bow but quite useless at everything else. He had average stats and not much else; I didn't know him as a character and didn't bother with a detailed background. In fact, he never has had any background and his life basically starts as he enters the Inn of the Last Bridge, the location in the Trollshaws for the first adventure in the original boxset. As a treat, the GM allowed me to have two mountain lions as pets and, as unpredictable as they were, they were great companions.

Tere had quite a life - he ran through the adventures in the Trollshaws, then rescued captured elves, searched a run-down keep and uncovered a plot to raise an army and sweep across the land (this was pre-War of the Ring). Hr helped raise army, defended a castle, explored ruins for magical aide, set up a treaty with some elves and won the day, losing a mountain lion and an eye in the process.

The adventures got bigger and bigger, so big that the GM moved the action from Middle-Earth and created a fantasy version of Europe for Tere to adventure in, so that his deeds could grow, his renown increase and his legend become known across the land. This also freed the GM from the constraints of Middle-Earth; now he could create any kind of adventure he wanted and surprise me at his pleasure.

Tere had plenty of friends he fought alongside; Minastir the swordsman (he made bad decisions but was a good friend), the golden-haired brothers Eoner and Errone (steadfast and reliable), the elf-maiden Minwe (she could not talk but fought well, and they ended up married with children), and Minwe's brother who helped seal the treaty between Tere and the Elves.

Tere ended up with a family and, with his riches and fame, he bought the Inn of the Last Bridge to retire in, and he hung up trophies on the wall to commemorate his life and the lives of those he lost; the collars of his mountain lions, Minastir's two swords, the spears of the brothers, and various trophies and mementos. And that's where he's been since 1990.

The GM ran the games with such intensity that the sessions got incredibly melodramatic, driven and emotionally engaging. It was the first time I'd played a game where the characters drove the story, not the adventure design or a dungeon layout or a railroaded sequence of events. I truly found the campaign engaging because I made a difference, and it was where my love for story-focused narrative gaming began.

Now, MERP was great fun but could be cumbersome and there was no real way to communicate a character's motivation. The rules were mainly just numbers on a sheet of paper. I created Tere with a simple aim; he was going to do good, and help people as best as he could. And he did so, and that was all I needed for him. A sword, a bow, and a desire to be a hero. Since he retired, I never intended to play him again.

However, a new game has entered the fold. 'Against the Darkmaster' from Open Ended Games is a revamp of old MERP and Rolemaster, but it has been streamlined and modified to make it easier to create a character and the resolution system is much more refined. Bear in mind that I have only seen the Quickstart Rules for the game - I'm waiting for the POD before I purchase the full game as I want the physical book, but the PDF is available now - but what I've seen makes me very, very excited. It captures what I loved about the MERP, drops a few things I wasn't fond of and adds a few extras I'm sure will make a difference. I dropped crunchy games in favour of rules-lite systems a long time ago, but Against the Darkmaster is making me break that, and now I want to create a detailed character again.

And that brings me back to Tere Swordsong. For the first time in 30 years I want to play him again - or perhaps a descendant of his - because there is a new part of the rules which covers Background, Passions and Drive. Backgrounds give a little history to the character, Passions give the character a purpose and help explain why they're adventuring (in Tere's case, it was a desire to do good and be a hero) and Drive is a mechanic that can help the PC during the game. It's something I wish I had had access to when I created Tere way back when, and I think it's a great addition to a game that could get lost in crunch but seems to have a desire to give the PCs impetus and agency, and allow them to tell a story of their own. Once I get the rulebook I'll know more, but I'm excited to see what I can do with the game and how it may be able to emulate the epic MERP game I was a part of.

Tere Swordsong is my favourite PC of all time and I have had no desire to revisit him until I read the Quickstart of Against The Darkmaster. I read about this game and saw it growing into the Kickstarter but I never thought I'd get caught up in it, no matter what nostalgic feelings it stirred in me. But I've seen how they've made the game and the system their own, and now I'm on board and I'm excited about going back to a set of rules I really enjoyed. 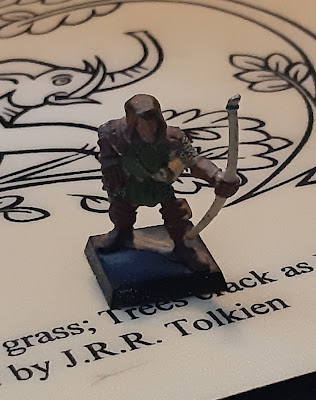