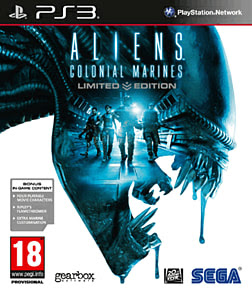 I like to mine computer games for inspiration for my tabletop roleplaying games. Atmosphere, stories, situations, music, there's lots you can take away from a decent game and implement it in your campaign.

I've been riffing on the movie Aliens since it came out. For the last twenty seven years I've taken elements from the movie and used them in my own campaigns, be they Star Wars, D&D, Buck Rogers or whatever; there's always room for some Aliens-type action in a game. I'm a huge Aliens fan as it was one of the films I grew up with as a teenager so it made quite an impression on me (although I have to come to realise that Aliens is a great movie but a bad sequel to it's predecessor). So, you'd have thought that a computer game billed as the sequel to James Cameron's 1986 classic should be filled to the brim with inspirational material.

Sadly, it's one of the most uninspired games I've played. Not just as an Aliens game but a game as a whole. 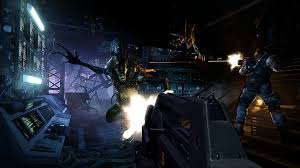 Seventeen weeks after the events of Aliens, another starship arrives at LV-426 to investigate what has happened to the marines that accompanied Ripley on the ill-fated expedition. The game starts pretty well and has some atmosphere. The first encounter with an alien has real tension and you get the impression that these creatures are truly dangerous. Just one creature keeps just out of sight and I had to pull off a lot of snapshots but finally I got it and a feeling of relief washed over me. If the game was going to be like this then things should be good.

Sadly, this is probably the only moment of tension in the game. Following this initial encounter it turns into a standard shoot-em-up, with aliens coming straight at you with no regard for tactics or self-preservation and are simply there as something for you to gun down. Even the human foes later on have atrocious AI and it's a simple case of blast-walk-blast-walk some more. There's nothing tactical about the combat and the tension level is zero.

The locations are all there - the Sulaco, Hadley's Hope - you know, the place that was supposed to have been vaporised in the movie, so straight away there's an eh? - the derelict; they're all there and they share the same visual design as the movie but... I've already seen all this in the movie, so why would I want to wander around there and shoot random pixels?

There's simply nothing much new. I'm fan of the movie and there's plenty of little easter eggs and nods to the film but even I was unimpressed and even a little bored by the inclusion of Aliens references. It simply wasn't enough to keep me engaged.

All in all I've been left with the impression that this game was simply cashing in on the heritage of the Aliens movie and this made the developers a little lazy. Fans will mostly enjoy it but I was left with a sense of disappointment and I'm surprised at that, considering how long it was in development.

Bad gameplay and lack of depth equals a wasted opportunity. It's a massive shame.
Posted by Farsight Blogger