Review - Amongst The Stars issues 1 to 3 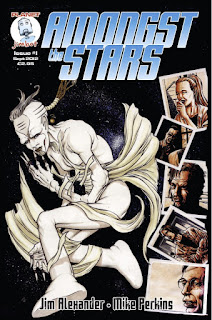 
Welcome to Planet Jimbot’s first publication! This a new comic from the writer that bought us King’s Crown/Metal Hurlant Chronicles, Birds of Prey and Marvel Milestones, and the Eisner winning artist previously known for such titles as The Stand and Astonishing X-Men - the Wedding Issue. With backgrounds like that you expect something special should be happening in the covers. And, honestly, they don’t disappoint.

The attractive front covers are full colour - they're very atmospheric and set you up nicely (and the Planet Jimbot logo is pretty cool!). In the first issue, after the first page introduction, the comic begins with a harsh scene of a dying child. That was a little jarring and I was immediately concerned that perhaps this comic was going to try to shock me; fortunately, this scene sets things up and drives home the power of the connection between Earth and the Tchailungs, the alien beings who are experiencing life on Earth by reaching out with their collective minds. As the introduction on the first page explains:

An alien race reaches out to planet Earth, but only with its collective minds. But for the aliens — too late — it proves a crippling experience, where Earth is dragging them down to a level they don’t want, and are unable, to go. Everyone on Earth remains blissfully unaware of this alien intervention, or do they?

I’m not going to go through the story – I’m not big on giving away plot points or explaining what’s going on in a story as that’s up to the reader to experience. This is not a fast-action adventure at all – in fact, the story is slow but doesn’t drag. 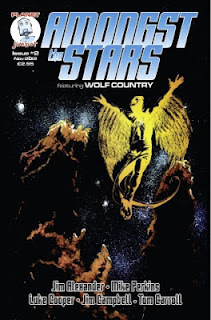 First of all, the artwork is straight forward black and white. There’s no shades of grey, here, and it suits the story well. Mike Perkins’ art is sharp and detailed and there’s a lovely sense of flowing movement, especially on the planet Tchailung where we see the aliens themselves, being cared for by the ‘White’ (and I’ll leave that for the comic to explain, it’s very clever) which means that all we see of their world is the aliens themselves – and they look great, but not otherworldly enough so that we can’t relate to them in some way – and a white background of nothing. This does two things; one, it gives the alien characters a sense of wonder and otherworldliness and two, it leaves a lot to the imagination. I have no problem with that – in my experience, half of good science fiction relies on what the person experiencing it brings to the table. That’s not to say that the artwork is leaving out huge swathes of paper and leaving the reader to fill in the blanks with  their own imagination; not at all, the detail and quality of the artwork is excellent.

Jim Alexander’s writing is great for this piece – there’s a simple opening that allows the images to tell the story but as the comic progresses he opens the storytelling floodgates and talks us through Mike Perkins’ images with some great narrative, letting the conversations carry the story where necessary and then filling out other details as required. There’s some great storytelling here and it helps to create then enhance the atmosphere, and it caters for one element of my science fiction tastes – that element of the peculiar and unexplainable. 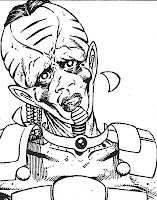 Along with the main story in the 3 issues we also get a short story from Tom Carroll ‘The Lie’, serialised as single page stories (no art) about a future war, which is very good but best read as one hit once you get all three issues. Also in issues 2 and 3 we also get the short comic ‘Wolf Country’ written by Jim Alexander, drawn by Luke Cooper and lettered by Jim Campbell. This is about some unfortunate God-fearing people besieged in their compound by ravenous werewolves – although all is not what it seems. This is an interesting if short story and sadly it’s not long enough or engaging enough to really be able to sink my teeth into (pun intended). The artwork is sharp and well done, even if sometimes the images have no real depth, but it’s entertaining and serves as a pretty good filler story. I’d like to see more from this team, perhaps something a little longer next time.

Would I recommend these three issues? Absolutely. As a science fiction fan of all eras and genres I really enjoyed the primary story and the art, writing and presentation is excellent. I’m really impressed with this as a first publication from Planet Jimbot and I’m looking forward to seeing more of what these guys have to offer.
Posted by Farsight Blogger