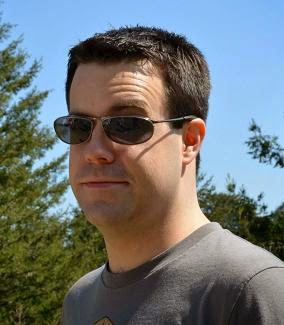 Realm Works is the tool every Game Master has dreamed about for managing campaigns. Spend less time preparing, more time creating, and focus on sharing the story with your players! Built by a team of experienced GMs, Realm Works can be used with any game system and allows you to create and manipulate your world like never before.

Perhaps you'd like to tell us a little bit about yourself?

My name is Joe. I’m a designer and software engineer for Lone Wolf, specifically Realm Works. I’m an avid PC gamer and builder, miniature painter, and RPG game master and player. I also enjoy running and target shooting, along with personal software development side projects. I’m married to the wonderful Liz, who you might already know from Lone Wolf’s forums, website, or social media. We have an adorable and energetic Formosan mountain dog named Kaylee.

Tell us about your RPG history - what got you into the wonderful world of tabletop roleplaying?

My first game was a long time ago. My friend’s older brother was running a game and the group needed a cleric (of course). I had no idea what was going on, but I thought it was weird and cool. After that, I didn’t think much of it. Years later, some friends and I discovered the board game Hero Quest, which is sort of like a proto-RPG. There wasn’t really role playing, but there were random/variable dungeons, killing monsters, avoiding traps, collecting and spending loot, etc. After lots of Hero Quest, one of our friends introduced us to Dungeons and Dragons 3.0. Since then, I’ve played with a number of different systems and genres.

What is it about the tabletop RPG hobby that attracts you? What do you enjoy most when playing a game?

I suppose now I should mention that everything in my answers is my own personal opinion, and doesn’t in any way reflect the opinions of Lone Wolf Development as an organization. I also recognize that these are my own personal preferences and opinions, and that others can and should feel free to have their own differing opinions.

My love of computer gaming undoubtedly colors my RPG preferences. There are certain things that I believe computer games are just better at as a medium: complex mechanics and computation, physical simulation, visual and audio immersion, etc. If I want a grid-based tactical challenge, I’ll prefer a video game like Civilization or XCom. If I want mechanical character progression, loot, and itemization, I’ll look to games like Diablo, Borderlands, Elder Scrolls, Planetside 2, etc. It’s not that I won’t play a combat and mechanics-heavy RPG (you’ll see that below), but it’s not what attracts me to RPG’s. I believe that video games are not (and perhaps never will be) good at deep social interaction with NPCs, open-ended storytelling, and player/GM freedom. I think RPG’s can reliably provide these things, and that’s why I come to them.

What's your favourite game? What games that are out there at the moment float your boat?

I’m a big fan of the new Star Wars games coming out of Fantasy Flight (Edge of the Empire, Age of Rebellion, etc). Part of this is because I’m a fan of the original trilogy, some of the novels, and these games are set in the thick of that. The systems are very different from the d20-based systems I’ve been used to for so long, and change can be a good thing in my opinion. They are a deliberate departure from heavy mechanics, and also have a clear focus on interaction, storytelling, and freedom (see above). The things I love about the system itself aren’t Star Wars specific though, and could apply to any genre really. The same game designer made an earlier, similar system for Warhammer Fantasy Roleplay 3rd Edition, for instance.

Do you still get time to play? What are you playing at the moment?

I don’t have a ton of time for RPGs lately, but I’m currently involved in a long-running Pathfinder game with the Savage Tide adventure path. I joined it at around 9th level when it was being run under D&D 4th ed. We’re now in the high teens (18th or 19th) with a few Mythic tiers to boot. While Pathfinder is undoubtedly a mechanics-heavy game, it’s a solid system, I like playing with my friends, and our GM is able to inject a lot of personality into the NPCs and storylines.

Tell us more about Realm Works. It's been seen all over, most recently at PaizoCon, and it's a handy tool for world building and makes campaign management much easier; what was the attraction in making such an application?

In general, I think the big attraction people have to Realm Works is that everyone wants to have immersive, believable worlds but that getting there is so hard. I remember my first attempt as a GM to make a system for myself involved a big stack of index cards and tabbed dividers. It was helpful, but limited in a lot of ways.

I think another attraction for people is that it refocuses RPG tools on the major strength of RPGs: role-playing and collaborative storytelling. Most tools have been centered on managing mechanical complexity: character creators, dice rollers, initiative trackers, combat grids, and so on. You’d think that tools for managing mechanical complexity would reduce the complexity of our games, and they do to a certain extent. From my perspective though, complexity is inherent in the system and mechanics and doesn’t go away, but becomes easier to deal with thanks to the tools. I also think that easing this burden results in more game sessions focusing on mechanics, which is great if that’s your preference.

Realm Works helps you manage narrative complexity, and in the same way, this doesn’t mean you’ll be spending less time on narrative because it’s less complex. It means that you can have more depth to your narrative before it becomes burdensome. Where before it was difficult to have more than a handful of NPCs and plot threads, you can now have Game of Thrones-level intrigue going on (and again, just my personal feelings, no endorsement from George R.R. Martin or HBO!) Much in the way that I believe mechanically-focused tools encourage mechanically-focused games, my hope is that  having some narrative tools will result in more game sessions with enjoyable role-playing, narrative and collaborative storytelling elements.

The big attraction for me personally is that there’s nothing really comparable to Realm Works. As a developer, working in uncharted territory like this is exciting, educational, and rewarding. It’s also very exciting to want to actually use the product you’re working on, which is something many developers can’t say.

It's very polished, so what went into building the tool? Was there a lot of work involved?

We’re happy to hear that! We’re a small team working on a big project, so it’s sometimes hard for us to look past what we see as obvious, glaring flaws. We’re often our own worst critics, but that keeps us always relentlessly pursuing quality and polish.

Realm Works has a lot of intelligent technology under the hood that hasn’t really been seen anywhere before, certainly not in gaming products at any rate. There was a lot of thought and effort put in to design and architecture for the engine that drives Realm Works, which took a considerable amount of time. Really the concept itself has been a lifelong dream for Rob (it’s creator and Lone Wolf’s owner), and technology has only recently caught up to make his vision possible.

Work is still ongoing, and will be for a long time. Realm Works is not really a product where there’s a finite set of features, where we package and deliver it in a final state and then never touch it again. It will be constantly evolving as the gaming and technology landscape changes.

I think RPGs are already seeing a split, with systems focusing on storytelling, player and GM creativity, and social interaction parting ways from systems that focus on mechanics, simulation, combat, and number crunching. There’s nothing wrong with having a personal preference for either, but I do think the narrative-focused branch will have an easier time in the long run. It delivers a unique experience that can’t be found elsewhere, while the more mechanical games will need to differentiate themselves from other mechanics-focused card games, board games, tabletop war games, and video games.

I also think we’re going to see technology playing a greater role in tabletop RPGs of all kinds. We already have virtual tabletops, telepresence, and obviously tools like Hero Lab and Realm Works. This is only going to become more common and mainstream as time goes on. I think there’s still a place for low-tech RPG play too. There’s something special about paper character sheets, miniature figures, pencils, books, and dice. Humans like concrete, tangible objects. We like sitting around a table, talking face-to-face. I think there’s a balance to be struck that is unique to each group and player.

What are you working on at the moment?

Right now I’m playing with learning the Unity 3d game engine, as well as some basic 3d modeling in Blender, both of which have been new and interesting challenges for me. But as a developer, artist, and gamer, it’s scratching a lot of my itches all at once!

Lone Wolf Development also bought us Hero Lab. Hero Lab makes character creation a breeze, automatically tracking modifiers for every stat, ability, item, spell, and option you select. The automated validation engine verifies that all prerequisites, minimums, and other requirements have been met, pointing out where your character is in conflict with the rules.Hero Lab also acts as an electronic character sheet at the game table, keeping track of your health, abilities, and more during the game. Once the adventure is over, use your experience to advance your character to the next level and beyond!

Many thanks to Liz Theis for arranging the interview.
Posted by Farsight Blogger