Book Review - The Skyrim Library Vol. I: The Histories 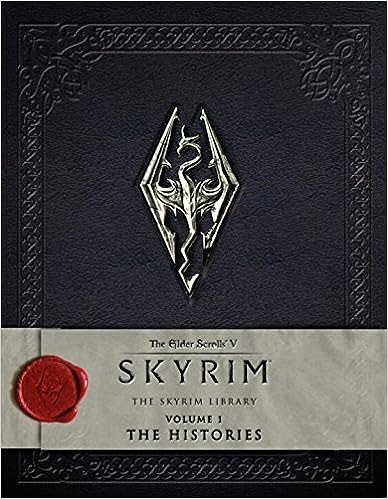 I can't claim to be one of the longest term fans of the Elder Scroll. I'd dabbled a bit with Oblivion but it was already a bit old when I got it so it wasn't until Skyrim came out that I really discovered what the fuss was all about. I first bought the art book that was released with the special edition (via a helpful chappie on the world's foremost auction site) and loved the look and design of the world so much that I thought I should really give it a go. It didn't hurt that I had friends who were already big fans saying that I would love the game. My only reservation came from the fact that I didn't think first person hack'n'slash games really 'worked'. First person shooter works, that makes sense, but first person walk up and hack at them? I remembered games of old, such as Witchhaven, that had impressive Frank Frazetta cover art on the boxes but which were hardly playable. As should already be obvious I relented and found out that games have come on a little since the 1990s. Who knew. And one of my favourite activities, aside from the quests, was to gather the books. There is such a wealth of lore and history to the Elder Scroll games that I loved to stop and just read (something that didn't much impress the people watching me play) and even, thanks to the Hearthstone expansion, managed to build libraries in all my properties that I worked assiduously to stock with one copy of every book.

So, getting to the point, you can imagine my excitement when I heard about the Skyrim Library collection. I can't remember exactly but it's entirely possible that I kissed my fist and punched the air. A rich, detailed history is essential for a solid fantasy offering. Fact. Try to imagine The Lord of the Rings without the immense wealth of background material. Likewise Game of Thrones. Even if it is never mentioned directly these rich tapestries have a direct impact on the stories and ground them, make them more than just a simple adventure story. It puts the reader/player into a context much larger then it would have been otherwise. To play as part of something epic, rather than just flashy.

Now, before I carry on, it is worth mentioning that whilst quite comprehensive this history is not at the level of Tolkien. I don't consider that a harsh judgement, however, since that's one hell of a bar to reach for. On a level with Game of Thrones? I would say that, in terms of scope and breadth, then yes, these are on a par with George Martin's masterpiece but, you won't be surprised to hear, are not written with the same quality of story telling. Again, though, I say that there's no shame in not reaching that lofty height. Especially when you consider how many stories are included in this book. There are forty-seven entries grouped in to four sections spread across two-hundred and thirty-two pages. So the stories are definitely on the short side, approximately the same length as a decent Brothers Grimm tale. Some are longer, some are shorter, and the early history section includes parts that are just lists of dates and corresponding events.

The four sections are History, Skyrim, Morrowind and Dragons. Most stories are in the History and Skyrim sections and collect the stories that players were able to find throughout the games. This is a very welcome collection, therefore, since I really enjoyed the stories but didn't really want to waste hours of my life reading instead of playing the game. I did, because I'm nerdy that way, but it probably wasn't what you'd call 'time well spent'. Having the stories gathered in hard copy is great.

My only concern, therefore, is that there were a LOT of stories in the games and I get the feeling they've barely scratched the surface with this first volume which, it has to be said, isn't cheap. I'm not saying that it's not worth the money, just that by the time they've completed the library I'll have spent a lot of it. I do feel that they are slightly overpriced, by about five pounds or so.

The only problem I have with the actual book itself, which is very well made, is the quality of the art work. The art that exists for the Elder Scrolls, which I have seen in the special edition art books released for Skyrim and The Elder Scrolls Online, is frankly incredible. The art included with the library, however, mostly isn't. It simply isn't that good by comparison. I'm not saying there aren't any decent pictures, there are, but I was left wondering what happened to all the quality pictures that I had seen before.

But you don't buy a book like this for the pictures. That's what the art books are for. You buy a book like this for the histories and lore and on that playing field it scores highly and is a very nice collection. Needless to say this is one for the fans above all others so if you're not a player of the games, and Tamriel might as well be the name of a country in the Middle East for all it means to you, then you might want to give it a miss. If you just like a nice fantasy tale then I suppose you could enjoy it but without being able to place things in the wider context of the games, things like the races you've played as and the monsters you've killed, then it might feel like a fairly hollow experience.

But if you can tell your Khajiit from your Argonians and feel confident you could walk from Hammerfell to Morrowind without winding up in the Black Marsh then this book is for you.
Posted by Farsight Blogger