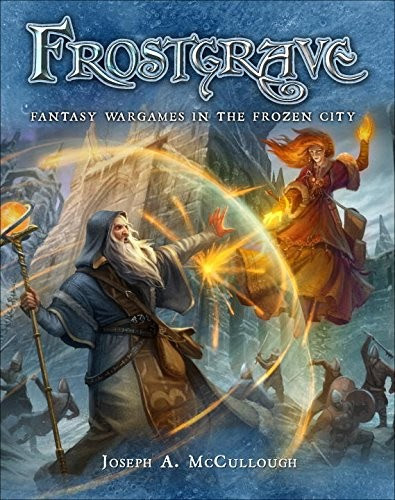 Joseph McCullough is the creator and author of the tabletop skirmish game 'Frostgrave - Fantasy Wargames in the Frozen City', which is doing the rounds on the tabletop circuit and is getting a lot of well-deserved attention. I caught up with Joseph to find out more about his hobby, the genesis of the game and what else lies in store for warbands exploring the dangerous city of Felstad...

Hello Joseph, and welcome to Farsight Blogger. First of all, tell us a bit about yourself and how you got into this glorious hobby.

Thanks for inviting me. My story begins in Greensboro, NC. My parents were both sci-fi/fantasy fans, so I was already well-versed in some of the classic fantasy worlds like Narnia and Middle-Earth before I could read. My first contact with gaming came when I picked up a D&D box set from a yard sale when I was 8. I didn’t really understand the game, but I knew it was for me. Soon thereafter my father became my first Dungeon Master, for a Middle-Earth Role-Playing campaign. He’d never role-played before, but I think he enjoyed it. He even painted up a few miniatures.

Role-playing became my number one hobby as a teenager, and I took this straight into college at UNC where I spent most of my time (underground) at the local game store, Cerebral Hobbies. I probably played just about every RPG that was popular at the time. My favourites were AD&D, GURPS, CoC, Warhammer Fantasy Role-Play, and Deadlands. Along with this, I played a few miniature wargames. I had always loved painting miniatures, it was just a great way to relax on my own.

Some years after college, I decided to go for an MFA in Creative Writing and made the unusual step of travelling to Bangor in North Wales to do it. I didn’t complete the course, but I met my future wife, so it worked out. After we were married, I relocated to the UK. A year or so later, I got a job with Osprey Publishing in the production department. Nine years later, I’m still here.

Frostgrave: Fantasy Wargames in the Frozen City has been received really well and is doing great on the wargaming scene. How did the idea of a ruleset for just wizards and warbands come about?

From my miniatures collection! Over the years I have painted loads of wizards, but except for the very occasional RPG character, there never seemed to be much use for them. Since, in the UK, I’ve mainly become a wargamer, I kept looking for a wargame that featured wizards, but I could never find one I liked. So, I just decided to write my own.

The setting of the Frozen City, with a vast location covered in ice and snow and slowly thawing out to reveal centuries-old secrets, is extremely evocative. How and why did you come up with such a setting?

I knew I wanted to set the game somewhere really dangerous. I wanted players to feel that they not only had to contend with their opponents, but also with the table itself. Wizards are such powerful individuals, you need a scary location to challenge them.  A ruined magical city worked perfect, both to give the wizards a reason to be there, but also allows infinite scope for creating dangerous, deadly, and just plain weird scenarios. The idea of making it ‘frosty’…that was partly to up the danger factor one more level, but also to do something a little different. I suppose cold fantasy has become much more popular in the last few years, but there don’t seem to be many miniature games that embrace it.

Is there a larger world to the setting? There isn't a lot of background detail in the rulebook but in the 'Frostgrave – Tales of the Frozen City' fiction anthology there's tantalizing glimpses of life outside the primary location. Will you be exploring that at all?

There is more, and bits and pieces will be revealed slowly. However, I am someone who very much likes to keep his setting blurry around the edges. For one thing, the ‘there be monsters’ part of the map tends to be where most of the adventuring occurs, but also, I want players to feel very free to take the setting and use it any way they like. I think one of the reasons the game has caught on to the extent it has is that players enjoy being able to use whatever miniatures they want and making up a back story for them.

Are you looking to expand the rules? There's new campaigns coming out soon but do you have any plans for rules regarding other situations, for example large-scale combat and sieges?

For now, I’m looking to expand in depth, give players more options for customizing their warbands, new scenarios, and expanded rules for adventuring, such as fighting battles underground. Bigger battles could happen someday, but, in truth, I can’t see myself writing it. Larger wargames take a different kind of design philosophy that is much more numbers intensive and usually less narrative focused. I’m not sure I’m the best person to write that kind of game.

The setting - with it's long-lost ruins, empty towers and dark halls - is pretty much perfect for an old-school dungeon-basher such as myself. Any chance of a tabletop roleplaying version of the game?

That’s something I would be better-positioned and more likely to write, and there has been talk about it being a possibility. For the moment though, my schedule is taken up with writing new material for the main game, so it will be a while if it happens.

What else can we expect to see for Frostgrave in the future?

There is a full line-up of Frostgrave material coming next year – two new print supplements, and a handful of smaller e-supplements. There is set to be a bunch of new miniatures released in support of those as well. Beyond that, we’ll, I’m not allowed to say much, but the adventure will definitely be continuing…