Every year on Christmas Eve, the company department my wife Lisa works for has a morning of team-building exercises. This can take the form of crafts, boardgames, or anything else that takes their fancy, anything that makes them work together.

This year, Lisa convinced them to play D&D.

The original  plan was for me to show her a few pointers and for her to run the game, but as I wasn't working on Christmas Eve it was decided that it would be easier for me to DM. It was going to be a quick two-hour blast through a simple dungeon, and I figured it would keep them entertained for a while.

Now, these guys have virtually no experience with the tabletop hobby, let alone pen n' paper RPGs, so I was shocked when they really got into certain elements of the game even before I arrived on the scene. Characters had been created with detailed backgrounds, their role in the team had been worked out and they'd even made their own swords and weapons out of cardboard. At first, I had this feeling that it was going to be a bit of a piss-take game, and because they weren't gamers they wouldn't take it seriously.

Well, didn't I feel like the prat when we started. 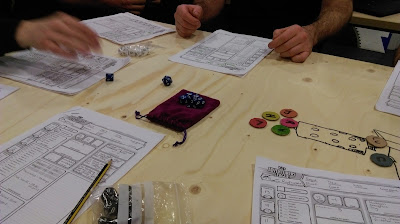 They got well into it. A few minutes into the game and we were fighting giant rats in a cellar, which lead to a secret entrance to an abandoned dwarven tomb. There were conversations about tactics, shouts of encouragement, and the first victory of the game got a cheer. Then there was caution, questions, exploration, some encounters that created some real tension and fun moments, and a final confrontation that created some excitement and a satisfying climax. It was the energy from the players more than my abilities as a DM; there was nervous expectation and some trepidation, but once I showed them that they could be as relaxed as I was they settled in to the game quickly. It was great fun and I think some will be doing it again, outside of work.

I learned some valuable lessons with this session; for starters, don't pre-judge the game and the players. I expected some fun and a dismissive playstyle, a casual game of no real significance, but they seemed to enjoy the game and I had a great time with new players. Secondly, D&D is a great team-building game. They started out a little disparate but soon came together as a group to defeat the (hugely underpowered) dragon at the end. It was a great ending.

Finally, always listen to your wife when she says 'you should run this game for us'. You never know what you might miss out on.
Posted by Farsight Blogger