I spoke with Neil about gaming, Fighting Fantasy and the games he plays and creates.

Like you I have a rich and involved history with the Fighting Fantasy gamebook series - it's what got me into tabletop gaming. What attracted you to them, and how much of a fan are you?

I think a blog post that I wrote back in 2009 is still very relevant to this question and better articulates my passions than the me six years later could ever hope to write again!

'I’m about 10 years old, the year is about 1985. It’s a cold and rainy spring weekend and my family have made their way down in our old campervan to the New Forest in the South of England, UK. My step-father loves windsurfing so we park up at Avon Beach car park in Mudeford, just outside the New Forest. He disappears off on the board into the choppy seas, and the rest of the family sit it out while wind and rain pound the poor campervan exposed to the elements.

I’m bored, so when the sun shows itself for a short time I wander down to a bookshop at the end of the carpark. The bookshop also doubles as a beach-shop selling buckets and spades, and small flags you’d put on sandcastles. The floor is slightly gritty with sand brought in from holiday-makers, and has that strange seaside smell mixed in with an inky newspaper smell. Tucked away around the corner is a bookshelf which changes my young life.

I bound back to the campervan, cradling my book purchase under my coat as the rain begins spitting again and I worry it may get wet. Sitting down to the makeshift table that doubles up as a bed when collapsed, I open the fresh pages of a book called “Deathtrap Dungeon” which is apparently called a Fighting Fantasy adventure. The next few hours I am whisked away to fantasy world and meet creatures that I would have never dreamed about, and have to dodge deadly traps to keep my character alive! I don’t have dice so can’t fight the monsters properly but that changes when we get home that evening and I raid the Monopoly box. I’m reading a book, but actually controlling the story! This blows my 10 year old mind at the time. We continue travelling down to Avon Beach carpark for a number of years as a family. At some point the campervan got upgraded, and at some point I learned to windsurf myself, but when we get back to that beach I return to the bookshop and buy out as many of these books as possible, including trying out other series such as Grail Quest and Lone Wolf, which I also love.

I’m 34 years old. It’s a windy and rainy July day and I’m sat in a car at Avon Beach carpark in Mudeford. I’ve come down to the New Forest with my family. Sadly this does not include my Mum who passed away two weeks earlier of stomach cancer – I miss her so very much. My step-father wanted to come here with the family, now with three young nephews, to think of the good times, and to find ways to grieve. The bookshop is still there so I have ten minutes to myself and walk down. The floor is still slightly gritty, and still has that strange seaside and inky newspaper smell. I walk around to the section which used to house all the gamebooks. It has now been replaced with racks of wetsuits and bodyboards. I feel sad but understand its time for me to move on with life in lots of ways. I walk back to the car and begin making notes about a gamebook I want to write called “Siege of the Necromancer”.'

What else have you played? What floats your boat in the tabletop world?

These days I don’t get to play much in the way of tabletop RPGs and similar. However I am slowly transitioning my 6 year old daughter away from her more childlike board games and into things a lot more complex. Recent successes have been Forbidden Island and King of Tokyo. In KOT’s case I was worried the mechanics may confuse her, but she completely gets it and I’ve noticed her maths and logic decision skills improve as a result.

So, the digital RPG 'The Warlock of Firetop Mountain' is well underway and it's looking great. What can you tell us about this game, and what will make it different from the gamebooks you have already adapted, and computer RPGs in general?

Essentially at it’s base core is the gamebook. That’s what we have the license to produce and it’s the major material we have to work with. Where we’re upping our game in this instance is in two major areas which are making it more visually accessible to gamers that like modern-day RPGs and increasing replayability. The way we have done this is by introducing digital miniatures, representations in 3D of the pewter figurines you would use in a table-top RPG or wargame. The digital miniatures can be used to move around a 3D representation of Firetop Mountain that accompanies the gamebook text – very much like a board in a board game or the graph-paper maps you may construct in a tabletop D&D game. What the miniatures also allow us to do is to add replayability by playing with a different miniature each time you enter Firetop Mountain and having a slightly different experience. The motivations of one character for entering the Mountain might be very different to another. 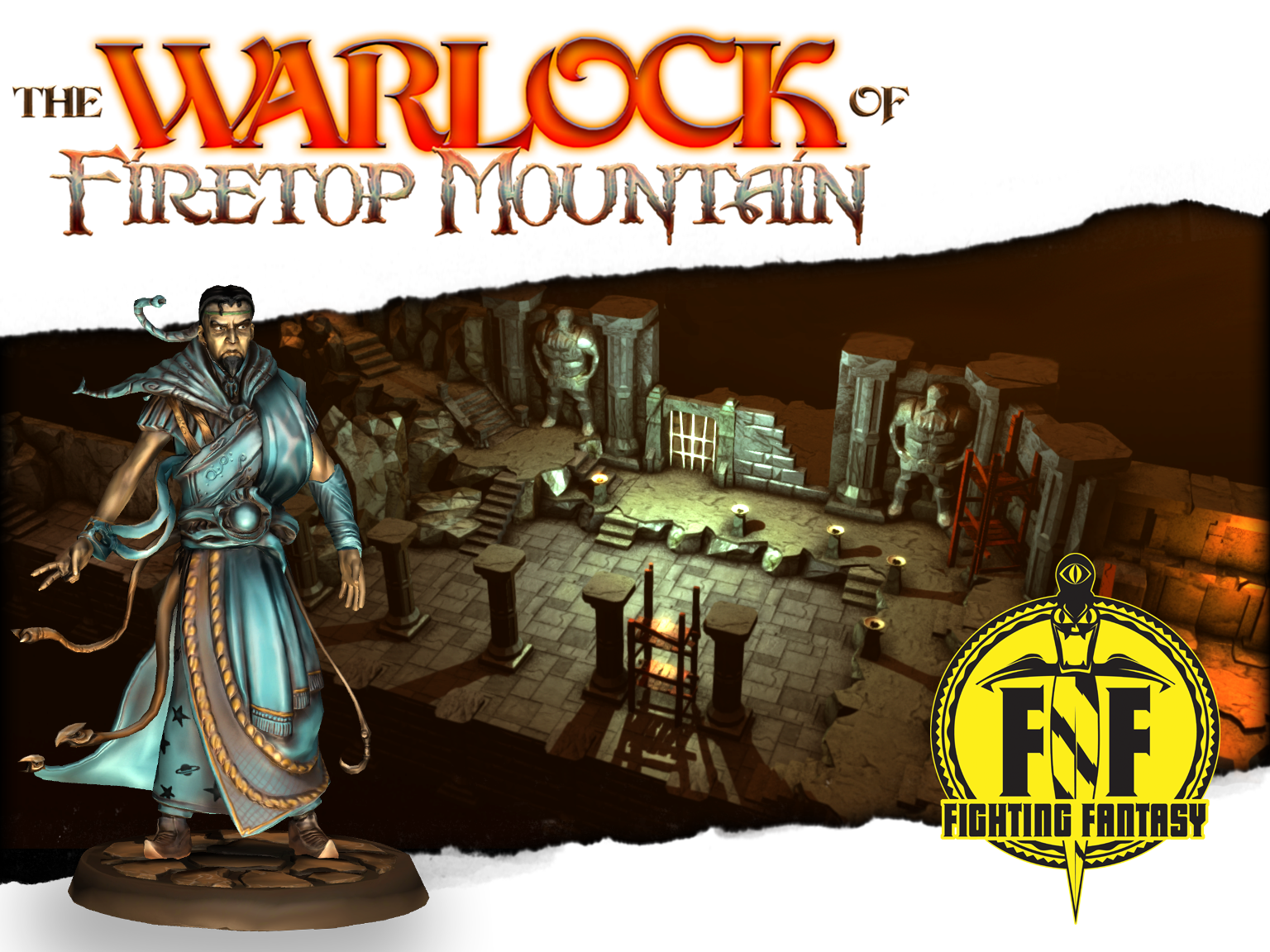 The last adaptation of yours I played was Starship Traveller; it was a great game and worked well as a text adventure, and was really nice to have to hand on my phone when I needed it. Is it a difficult job to make the adaptation, and are you ever tempted to change things around to confuse veteran gamers?

It’s actually very difficult. In the case of ST we pulled out a whole load of stuff that felt unnecessary in a modern adaptation and inserted in more customisation over your crew. By doing this we were able to add in more complexity and choice at not just a narrative level but at a game/sim level. ST in many ways is closer to games like FTL or Out There than many people think.

Do you have any plans to release any other gamebook adaptations?

We’re actually slowing down on the gamebook adaptations and looking at other properties. However, we have begun work on Grailquest, which we’re really excited about!

Your catalogue isn't just Fighting Fantasy gamebooks - you've got Warhammer and Dredd, as well, amongst others. Anything else on the horizon? What else can we look forward to from Tin man Games?

We have a few things ongoing. We’ll be looking to continue and expand our free-to-play subscription based game, Choices: And The Sun Went Out. We’re also working on a choice-based visual novel based on the Miss Fisher’s Murder Mysteries TV show, which is currently looking amazing!
Posted by Farsight Blogger