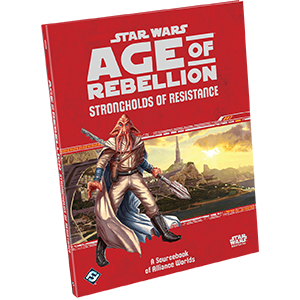 'Strongholds of Resistance provides thorough descriptions of several Rebel bases, Alliance Worlds, and the NPCs that your group of Rebels may encounter in these locations. It offers players three new species to craft characters from and a panoply of vehicles and gear to help characters carry out dangerous Rebel assignments. For Game Masters, it includes new modular encounters which can serve as single-session adventures or be easily integrated into your Age of Rebellion campaign.'

I like locations to game in and this book gives me those locations in spades, along with some new equipment, races, ships and encounters. If you're looking for a handbook to give your places new things to do, new places to see, and experience some of the key locations in the Rebellion such as Echo Base... well, you'll be launching strikes against the Empire from these fortified places before you know it, and after your operations you'll be looking forward to getting back 'home' to a meal and some R&R, and maybe a quick dip in a bacta tank.

The locations are my favourite section of the book by far. Not only do you get the worlds that have stood up against the tyranny of the Empire, you also get detailed Rebel bases to play with, which you can use as they are designed or adapt for your own use, renaming them and using them as templates for hidden fortresses across the galaxy. You get Polis Massa (espionage, starfighter support, and medical research), the Defiant Core (constructed out of a salvaged Star Destroyer from the Clone Wars), Tierfon (starfighter support) and, my all-time favourite, Echo Base on Hoth. The period that the book is set in means that Hoth is the central base of the Rebellion, so enjoy it... but don't get too attached.

There are several planets including Mon Cala (it's a bit damp there) and Sullust. Along with these worlds you get some new playable races, a Polis Massan, a Quarren, and a Verpine. The Verpine, and the Roche Asteroid field, are a favourite of mine as I remember with fondness reading about their adventures creating fighters at a secret base for the Rebellion, nearly thirty years ago now. Along with these new locations and races you also get new gear to utilise.

There's also some very interesting encounters to utilise. From fighting TIE fighters, to handling diplomatic negotiations, from fighting with the Sullustan resistance to destroying Imperial operations, each adventure will give you a game session or two each and are pretty good fun. There's everything a gaming group needs and there's something for everyone to do; battles, espionage and diplomacy will abound.

All in all this is a well laid out, informative and very atmospheric book and gamers looking to heighten that sense of Rebellion, of hiding in the stars as they fight against the evil Galactic Empire, will find this invaluable. As well as containing plenty of information about worlds and locations that will help to germinate seeds of adventure, the details in here will give you plenty of gaming hours interacting with both the strongholds and the denizens far beyond the adventures included.