Many years ago, and the main reason why I came up with the name Farsight so that I could have a label to gather my creations under, I created a really stupidly simple RPG system called the SKETCH system, because it was a sketched out version of a larger system I wanted to create and the name kind of stuck. SKETCH isn't an acronym of anything- I just thought it looked cool in big capital letters.

I did some simple settings covering most genres, and even had a stab at creating some unofficial games using established settings (purely for fun and not for profit - I have to say that because I can't afford a solicitor) and I had some fun with it.

For ages now I've considered doing a second edition of the game, but it's so simple I can't see point. There are some things I'd like to change, but right now it serves it's purpose.

My horror version of the SKETCH system can be downloaded here - the other settings are at the website here and they can all be downloaded for free. 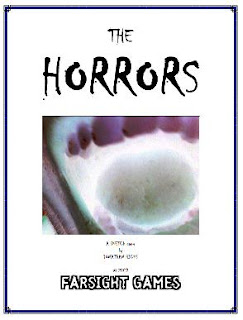