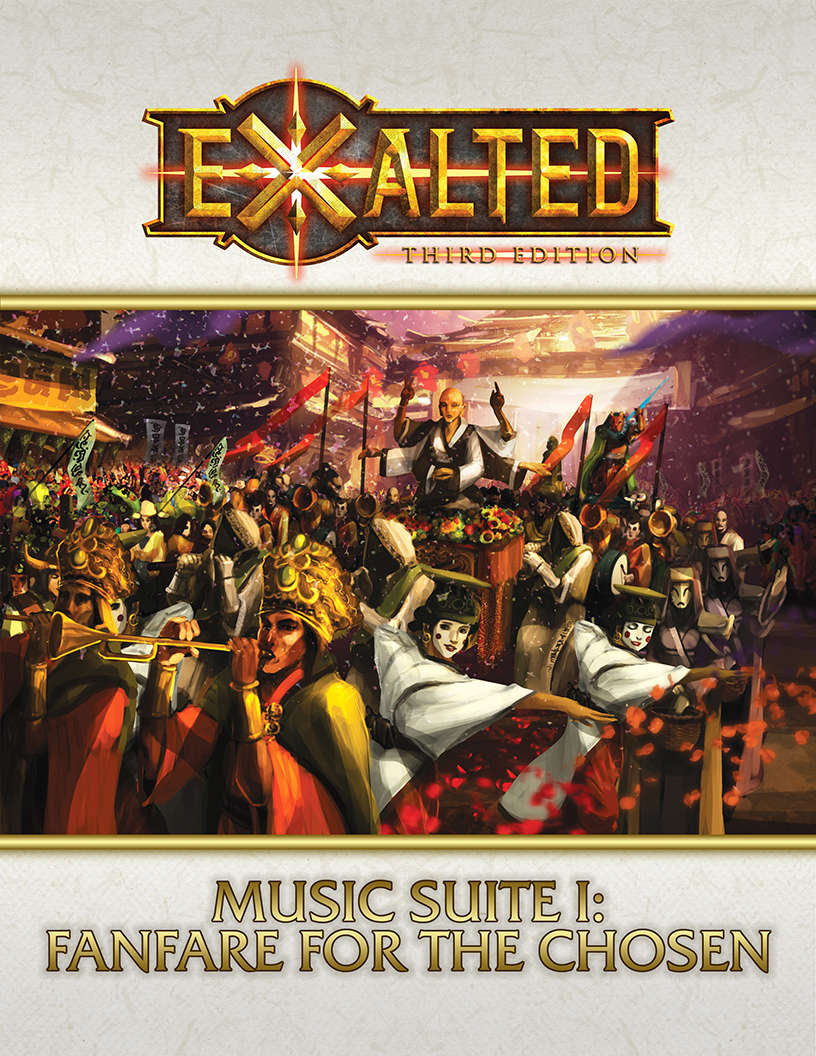 ‘Fanfare for the Chosen includes inspiring soundtrack themes for each of the ten types of Exalted (Solars, Lunars, Sidereals, Dragon Bloodeds, Abyssals, Exigents, Getiminans, Liminals, Infernals, Alchemicals), to set the tone as you encounter these Exalted in your games or are seeking inspiration for new stories.

An epic game for an epic setting requires epic music. In the RPG Exalted, players take on the roles of powerful heroes in a world of entities with the power of gods, and the world will be shaped by their wars and whims.

Now in it’s Third Edition, Exalted is ‘the tale of a forgotten age before the seas were bent, when the world was flat and floated atop a sea of chaos. This is the tale of a decadent empire raised up on the bones of the fallen Golden Age, whose splendor it faintly echoed but could not match. This is a tale of primal frontiers, of the restless dead, of jeweled cities ruled openly by spirits in defiance of Heaven’s law. This is a tale of glorious heroes blessed by the gods, and of their passions and the wars they waged in the final era of legends.’

Using music in tabletop RPGs has been around for a long time, and I used to use music from movie soundtracks quite extensively during my sessions. If the game we were playing was licensed and I had a suitable soundtrack that could be identified with the setting then so much the better. Williams' ‘Star Wars’ music and Goldsmith/Horner’s ‘Star Trek’ OSTs got a lot of airtime in my house.

Now there’s no need to match existing music soundtracks to the game you’re playing. Now games have their own OSTs, and one of the leading composers in this field right now is James Semple.

James Semple has given us ten pieces of music to use in our Exalted games, each one acting as an introduction to a session or a scene. While not designed for ongoing play, like background incidental music, they are perfect for the scene-setting introductions that GMs love to do. With this music playing in the background as this week's scenario is introduced it turns each session into an episode, with the track as the title music. It helps set the scene, helps set the mood and, most importantly, it helps get the players into the adventure.

Nearly a year went into composing, arranging and producing this soundtrack and it shows – the arrangements are of a high standard, with a huge orchestral roar bellowing out to the most rousing pieces. The production standard is excellent, well produced and is a polished recording of a very high quality.

Return of the Solar Exalted : A huge orchestral piece, this track feels like the opening credits music to a huge fantasy show. Playing this as you recap the adventure is a great way to get back into the campaign. That can be said of any of the following pieces, depending on the mood you’re trying to invoke. These are the heroes of the game and deserved a rousing theme.

Rise of the Infernal Exalted : Are you looking for a darker edge to this weeks adventure? Have the players just arrived at a dangerous location, or has a NPC with evil in their heart just walked on stage? This starts dark but still has an edge of urgency to it. The demons of the world drip with dark character.

Birth of the Liminal Exalted : Although a softer track for those moments of relative peace, this piece still has a touch of mystery and danger, as if it lingers at the edges waiting to pounce. This represents the wondrous, tragic and doomed creation of these constructed golem types, complete with a heartbeat in the bass starting halfway through the track.

The Alchemical Exalted – Ex Machina : Touched with an ethereal feel, this music marches like a clock, representing the mechanical, android side. This is almost entirely metal instruments representing these clockwork Exalts and nods to their almost Eastern Bloc state with a huge Slavic brass theme.

The Getimian Exalted – War in Heaven : Quick, fast paced and steady, almost like riding a horse. This track gives us the passion and drive of these warriors. It’s more heroic than many would have expected representing their war against the gods and contrasting dark and light.

Rage of the Lunar Exalted : Deep beating drums and horns lend power to this track, and gives us an excellent tribal feel to the game.

The Abyssal Exalted – Death’s Lawgivers : Beginning with a powerful, religious tone and followed by the bell of what sounds like doom singing, this piece reflects tragedy and sorrow and, in fact, is my favourite piece.

The Sidereal Exalted – Lesser But Safe : This would suit those games with investigation, calculation and confrontation. In fact, it sounds like the opening of a TV detective show and would be perfect for those games where roleplaying takes the lead.

The Exigents – Power of the Exigence : The newest thing in Exalted gets it’s own track, and it even starts out unsure showing their humble, normal beginnings and then their true power revealing in a huge wondrous crescendo as the music grows in confidence and power.

March of the DragonBlooded : Another piece that starts out soft, with an oriental air to it, but then the drums kick in and the power is revealed, leading to another huge crescendo.

Although each of these are between 1:49 and 2:10 long they make for great introduction tracks, and they help capture different atmospheres and game types. Are you looking to run something epic? Then begin the game with track 1 Return of the Solar Exalted. Mystery and darkness? That’s Track 3 Birth of the Liminal Exalted put to good use. Action and adventure? Track 5 The Getimian Exalted – War in Heaven would make a great intro.

They may be short but they’re perfect for the game. Yes, you can probably loop them in the background and that should work out fine, and it’s a shame that they aren’t designed that way as I feel that a long, ambient background track would go a long way... however, the good news is that such a thing is in the works, so I’m looking forward to that. They are designed as short, punchy deliveries for each of the Exalts. They are designed to be inspiring, to give you that boost before play starts, or to give you inspiration when designing a game.

Fanfare for the Chosen is an excellent soundtrack for one of the most popular roleplaying games on the market, and the music is suited to the gloriousness and the darkness of the setting. It’s another worthy addition to the RPG soundtrack collection and another excellent selection of music from James Semple.