DEATHWATCH is the newest Warhammer 40K Roleplaying game from Fantasy Flight Games, taking players into a whole new realm in the ‘Grim Darkness of the 41st Millenium’. Following on from their succesful DARK HERESY and ROGUE TRADER titles, DEATHWATCH now gives players the chance to play the super-soldiers of the Imperium: the Space Marines. 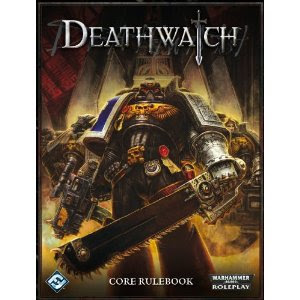 The premise is at once simple and clever. Instead of having the players sitting about the table discussing which one of their favourite Adeptus Astartes chapters they should be fighting in (and you are given six to choose from in the rulebook, but there’s nothing stopping you from adding others, or even your own), DEATHWATCH allows for them to choose their chapter. You see, each of the Space Marines has been hand picked to serve in ‘Kill-teams’, special squads of marines that are sent on small and difficult missions for the Imperium. So, instead of playing one of many marines in a chapter, you get to play a unique marine in a squad of many. Good start, and a great premise for a game.

So, I’ll give you a brief overview of the book. The system is the one you know from playing DARK HERESY and ROGUE TRADER so there is very little change in how the game work, except that these characters will be far more powerful than the PCs from the previous two games. It’s simple enough - a percentage-based system (roll less than your percentage in the skill to succeed) and it uses only two D10s for the roll. Specialities and Talents decide the abilities and skills of the marine you play and helps define your role in the Kill-team. There’s a long section on armour and weapons (including Terminator armour! Yay!) which gives you plenty of toys to play with, followed by a Psychic Powers section so you can play a Librarian and get busy with the mind tricks. And melting.. The Playing The Game section lays out the rules, whilst the Combat chapter gets to the nitty gritty of the game and gives you plenty of options to play with, including plenty of tactical options and critical tables. Following the Game Master section, which has plenty of good advice on how to run a DEATHWATCH game, is a chapter about the Imperium that goes into a lot of detail (including a lovely full-colour map of the galaxy). The book is rounded out by a chapter about the Deathwatch and it’s beginnings and credo, a description of the area of space the players will be thrust into, The Jericho Reach, a decent Adverseries section detailing the foes of the Imperium (including a section about playing ‘hordes’, in which GMs can create great groups of creatures/enemies and roll them as a single group, so the PCs can cut a swathe through dozens of enemies without having to roll for every single one of them) and an adventure, Extraction.

Now, as this is a capsule review I have primarily read the background and roleplaying possibilities that this book offers. To be fair, I had my doubts about the game as a whole. You see, to me the best of the WH40K Roleplaying games up to yet was ROGUE TRADER. I was concerned that a game where you spend your time purging and cleansing for the Emperor would get old and leave little space for roleplaying. While I did feel a little restricted by DARK HERESY (and was kind of upset that I felt I was playing second fiddle to an NPC Inquisitor in the original game), ROGUE TRADER changed my view somewhat. Shady deals outside the Imperium? Characters with depth, history, family bloodlines and mostly personal reasons why they were travelling the stars? Give me some of that! Now, with DEATHWATCH, the same doubts returned. Space Marines are about as two dimensional as you can get – WAR FOR THE EMPEROR! and all that entails. How could you possibly make a playable character out of that? I already had images in my head of running a game:

The DEATHWATCH rulebook handles this very well. There are entire sections on how to define your marine’s personality. It gives you options as to your heritage, allows you to choose what kind of world you heralded from and what kind of background/upbringing you had that lead you to becoming a Space Marine, to be surgically and genetically altered and enhanced to become one of the Emperor’s finest. You could have been a hiver or a noble, a savage or a religious knight... there was a reason you were selected for the Space Marines. Of course, your indocrination and training will make you think the Space Marine way but these details about your past help to define the small things about your character. The ideas don’t stop there – why were you selected for Deathwatch? What does such a posting mean to you? What do you desire, what do you hate? These questions help define each Space Marine as a singular character instead of being a cardbord cutout, a production line soldier who cares very little about anything other than purging and cleansing for the Emperor. These questions do make you think about your marine and why he does the things he does. In some ways it even makes you question if they actually want to do this! That way of thinking could lead to traitorous thoughts, but what a game that would make!

DEATHWATCH has done something very clever, something I’ve not seen done with Space Marines (and I’ve not read any of the novelisations so I don’t know how they handled it). They lifted the Space Marines out of their chapters, where they would be expected to act in a certain way and think as their battle-brothers do, and put them in a slightly fish-out-of-water scenario. They’ve been teamed up with marines of other chapters, marines who may do things differently, have different levels of piety or have traditions totally different to them. This could cause animosity, distrust, competition, even outright hate. As the game progresses these relationships either simmer, improve or deteriorate. Either way, that could make for some great roleplaying and that’s what I want out of a game.

All in all it’s a very impressive book. Weighing in at more than 400 pages, the hardcover book is filled with the usual high-quality full-colour artwork and beautifully laid-out glossy pages. It’s an impressive book and looks wonderful on the shelf next to DARK HERESY and ROGUE TRADER.

What didn’t I like about the book? Well, there’s plenty of material in here to keep you in games for a long time but expansions will no doubt be needed if you don’t want to create your own material. You can easily use DARK HERESY and ROGUE TRADER material to fill out your games, that’s the plus of the whole product line, but you will find that they are underpowered against the Space Marines and they’ll need tweaking. The Adversaries section could have been longer, with a few more baddies to mow down, but it works just fine. But, come on, no Orks? No Eldar? You get Chaos, Tau and Tyranids, and a few non-player characters I suppose you could use as bad guys. If you don’t have the previous RPGs and their supplements and DEATHWATCH is your first buy you might feel a little let down, as the amount of weapons you get to use is slightly ruined by the lack of bad guys to use them on.

As a fan of the Warhammer Roleplay worlds and a player of the ROGUE TRADER RPG this book mightily impressed me, even if I felt that the book could have done with more material regarding the things the Space Marines go up against. But, not only does it open a whole new area of the WH40K game world to roleplay in, I've also got the perfect material to make my ROGUE TRADER players nervous when they're instructed to transport DEATHWATCH Space Marines across the Imperium! An excellent addition to the WH40K Roleplay range.
Posted by Farsight Blogger