As some of you may know, and maybe even some of you care, I'm a big fan of the Fighting Fantasy gamebook series. Not only is this fondness borne out of nostalgia, I also think that the system is perfect for introducing new gamers to the hobby, both via the gamebooks and actual roleplaying games. Indeed, I used this system to introduce young gamers to the hobby the end of last year and they went away to form their own D&D 4th and Pathfinder groups.

The fanbase for Fighting Fantasy has always been active and there's a whole new slew of books due out, but in the meantime the fans have been hard at work - so I present to you 'Fighting Fantazine', a magazine by fans for everyone to enjoy. 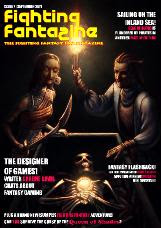 There's lots of interviews, games and resources for Fighting Fantasy gamers but there's plenty of stuff even non-Fighting Fantasy players can use, stuff that can be used for inspiration. I like this magazine a lot as it's incredibly well put together and very professional. I heartily recommend it.