My favourite RPG advertisements from days of old...

I've just found a folder on my computer called 'Old RPG Ads', and it appears I created it back in May of 2005. I appear to have gathered all kinds of scans and photographs of old advertisments from gaming magazines of the early eighties, primarily magazines such as White Dwarf, Imagine and Dragon. I thought I'd spend a few blog entries sharing what I've got with you. 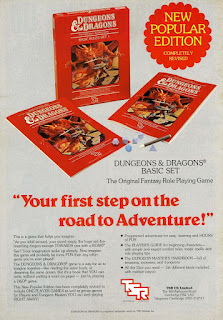 This one above makes me feel about 13 years old, when I hadn't properly gotten into gaming but always wondered what this game was about. The old-school layout and appearance just screams 1980s to me, and makes me want to go to the long demolished toyshop that used to be in our local shopping centre and buy the red box again, whilst marvelling at the miniatures. 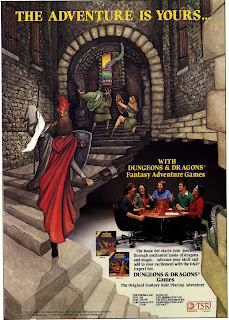 This one is well put together and would have definitely sold me on the game, although it appears the players around the table have forgotten their characters sheets but are obviously having a bit of a laugh about it. 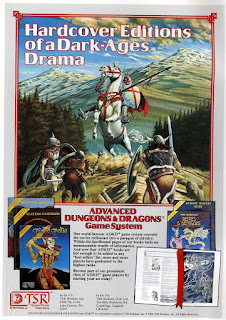 This one I remember extremely well but it would be a long while before I got into Advanced D&D, and in turn be put off the game for twenty years. I've recently picked up the 2nd Edition books again and I realise now what I missed out on. The Birthright setting alone would have kept me in campaigns for a decade!

I'll post some more another time. I love these trips down memory lane and advertsiements like this were an important part of our hobby pre-internet. Now we're bombarded by ads, videos and animated banners, so much so that the heart is a little sucked out of new advertisements. Of course, these old ones are cheap and charming but it's all we had back in the day and it's what wet our appetites.
Posted by Farsight Blogger