I really enjoy superhero comic book material. It's not something I'm heavily into but I do love it and I've come into the possession of a copy of the old Marvel Super Heroes roleplaying game. It's just the books, sadly there's no box, but I've got everything I need to run a superhero game either in the Marvel universe or - and this is probably the way I'd go - completely create my own. 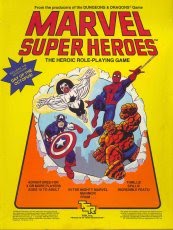 It's a neat little system and it's well presented. It's obviously aimed at kids and it particularly appeals to me as it's styled the way I remember comics when I was a kid. I've got isues 1-30 of the British 'Fantastic!' comics from the late 1960s (no, I'm not that old) and some of the mid-1980s 'Spider-man' and 'X-men' stuff. My wife loves a bit of DC's 'Batman' so we've got plenty of that lying about the place, too. To be honest, my greatest comic love of the 1980s and beyond was 2000AD and the superhero genre was a close second.

So this game came out at the time when I was getting deeper into roleplaying games, when I was at the target age for these kinds of comics and at a time when I could afford to purchase it. What perfect timing. I bought it and owned it for a glorious three weeks before swapping it for something else. I never got to play it but I remember enjoying reading it.

So, here we are the better part of 30 years later and it's once again in my possession, and I can honestly see myself running a game like this. It's great fun and I'm going to pitch it to my group as a filler once my Pathfinder campaign is over, run it as a semi-serious game.

Here's a great website 'Classic Marvel Forever', which not only supports the game but also gives stats for other comic publisher's creations, such as DC and Dark Horse. Anybody still out there playing this game will find this place really useful.
Posted by Farsight Blogger