Next Thursday will see the last part of my ongoing Call of Cthulhu campaign. At least, it should be as the players have reached some Mayan ruins where the climax will take place. Where they go after that - assuming they survive of course as the campaign has already claimed one PC - is for another campaign. 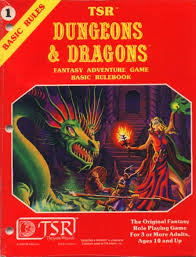 Last Thursday we started late and a player was delayed, so instead of doing half a game we decided to create characters for Big J's upcoming D&D campaign. We've played a lot of very enjoyable D&D 4th Edition and Pathfinder with Big J and he was looking at running a Dungeon Crawl Classics game (that's a brilliant rulebook, by the way, I recommend it) but he wanted to go back further than that. He wanted proper Basic D&D, with the old original rulebooks and everything.

We did the whole thing old style - 3D6 rolls, hit dice, the works. I'm not a fan of THAC0, in fact I pretty much hate it, but Big J wanted to stick with the basics so I'm good with that. We created a Fighter, a Magic-user, a Cleric and a Dwarf (that's me! Burgen Beerswiller!) and we ran through a couple of encounters to shake out the cobwebs.

I played Basic D&D a lot in the 1980s and it amazed me just how fast the memories came flooding back. I've not properly played Basic since then and yet I remembered it all. It was an absolutely amazing little run through and I adored every moment of it. I remember now why it was I fell out of love with AD&D 2nd Edition - it was because this lovely little game had become bloated and overly complicated and I missed the simple, quick games of Basic.

I am really really looking forward to Big J's campaign and can't wait to get back into it. I'm thinking of running a little campaign or two of my own!
Posted by Farsight Blogger