So, I was thinking of doing a cyberpunk game and, once again, I turned to Basic Roleplaying, or at least the Call of Cthulhu version of it, for inspiration. Using Cthulhu modern is the way to go.

In fact, it turned out to be very simple. Because of the nature of a lot of cyberpunk games, the fact that characters will be doing jobs of subterfuge for payment, all character advancement is determined by how much money they earn and spend, as all skill increases are determined by upgrades. It's a natural combination of the pay-per-job gaming style, and the need for the PCs to make money, directly influencing character advancement. What they do in the game, and whether they get paid or not, really does affect how they progress. 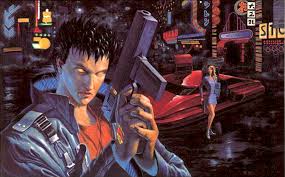 So, a physical skill such as swimming is a modification to the muscles - maybe something injected into the bone work to make the person lighter. To increase this skill by 1 percentile costs 5 thousand dollars.

If it's a knowledge skill like medicine or sciences, then the information is downloaded into the character's brain through a cerebral or a temple port at the cost of 5 thousand per percentile. Want to be a better shot? 5 thousand dollars and an adjustment to the eyes (and the relevant weapon skill). Want to be better at diving out of harms way? 5 thousand dollars and an adjustment to the nervous system (and the Dodge skill).

Now, what about hacking? Drop the POW skill and call it NET (you know, for netrunning and other computer use). The 'computer use' skill can be used for general keyboard stuff but invasive hacking uses NET. POW is INT + EDU divided by 2, rounding up. Whenever a character hacks, they roll against the strength of the computer security of the site they're trying to invade. So, a NET score of 15 against a Com Security target of 10 would mean that the player would have to roll 75 or less on the Resistance Table. If they fail there's a way out - they have to make a successful Idea roll to avoid setting off the alarms etc. It acts as a kind of saving throw and if they fail, they're noticed or outed.

All this affects Sanity. For every percentile point that goes into any modification, Sanity goes down by 1 percentile. If they fail their NET and their Idea roll then, depending on the security software they're trying to hack, they're not only thrown out of the system but the security attackes their neural link. They immediately lose a number of Sanity points equal to the Com Security difficulty number they're trying to hack and roll on any applicable Sanity tables. Sanity can be recovered by having NetMalWare scans, at a cost of 5 thousand dollars per Sanity point returned.

Com Security starts at 5 for easily hackable systems, all the way up to 18 plus for solid government/corporation security.

Use modern-day prices and the cost prices of Cthulhu modern, stick in some flying cars and watch Blade Runner and Ghost in the Shell beforehand and voila - instant cyberpunk goodness.
Posted by Farsight Blogger