Press Release - The Book Of Roleplaying Hints, Tips and Ideas available on Kindle 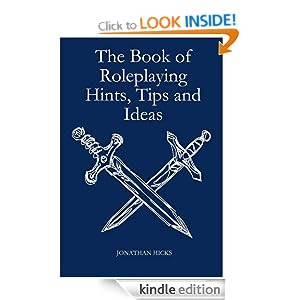 Jonathan said: 'I've been writing articles about the roleplaying hobby for the last couple of decades and they've appeared in online magazines, on websites and on blogs. I thought I'd get them all together and release them as a Kindle book as e-books seem to be the way forward and Kindle is quick, easy and accessible.

I cover everything from problem GMs and players, designing locations and characters, coming up with new ideas, how to maintain a consistent atmosphere... I've made copious notes on how to improve my gaming experience and maybe someone out there might benefit from it. Now that they're collected in this single volume it's easy to download and utilise.'

Published twice by the British Science Fiction Association in their writer's magazine 'FOCUS'.
Designed the missions and wrote the dialogue for a computer game of Universal's new Battlestar Galactica, Designed the simple game system 'SKETCH' and created 'Farsight Games' to promote this simple, easy to run rules light game.
Designed and wrote 9 SKETCH games, both new settings and established ones (in an unofficial capacity). Wrote for and edited 9 issues of 'ODDS: The Tabletop Roleplaying E-Magazine', and interviewed RPG industry notables such as Bill Coffin and Eric Gibson.
Reviewer for the tabletop gaming hobby, with reviews featured on own blog Farsight Blogger as well as rpg.net. therpgsite.com and ukroleplayers.com.
Posted by Farsight Blogger