I've made some of my earlier work available on Kindle - A Soldier of Rome, Those Dark Places and All Fall Down. All nice and cheap! 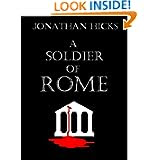 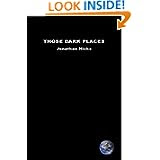 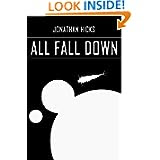 A SOLDIER OF ROME: After suffering a serious injury during a great battle, a soldier of the Roman Empire struggles with continuing forward with his life.
Feeling that he has let down his fellow soldiers, his sister and his friend, a decision is made, a decision that sends him on a downward spiral that he is sure he can never rise up from...

"I grew up with the grandiose science fiction tales, in books and on film, with great galaxy-spanning adventures or life-changing technologies," said Jonathan Hicks. "In this book I concentrate on the 'little guy', the people who work behind the scenes and those who get a less than stellar deal out of the supposed adventure travelling the galaxy and exploring new technologies offers." Click on the 'preview this book' under the cover picture above to find out more about these stories. Contains strong language and some violence.

ALL FALL DOWN: VITALS is the story of a man alone on a gigantic generation starship, the ‘Heart’s Endeavour’, looking after thousands of frozen travellers with only an artificial intelligence for company. When the AI manifests itself as a hologram so that the man can interact with it more effectively, the relationship takes an unexpected turn.
I DO NOT REMEMBER THE STARS OF OLD is a continuation of the story ‘Geta Huda Sharoon’, a short story included in the book ‘Those Dark Places’ which is reproduced in this publication for clarity. It follows the adventures of Brune, an Ooman despised by all other races trying to find his way through a galaxy that would rather see his kind dead.ALL FALL DOWN is the story of an apparently unimportant battle on an unimportant world. You cannot weep for a future doomed by ignorance.
Posted by Farsight Blogger