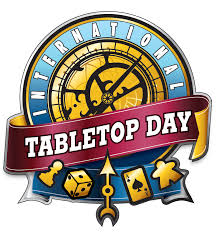 It was Tabletop Day today and there was a huge gathering at Titan Games in Lichfield.

Proprietors Martin and Adam opened their doors at 10 o'clock this morning and aimed to do a full 12 hours of non-stop gaming- I left at three o'clock and the poor guys looked ready to keel over! They'll be putting up a battle report on their Facebook page after the event so no doubt we'll hear a lot about sore backs and spinning heads!

There were games galore today, old and new. I watched games of Space Hulk, Spartacus, Warmachine, the good 'ol classic boardgame Colditz , Ticket to Ride, 40K, all kinds of things were on the go and everyone was having a blast. I bought along some classic D&D and other RPG stuff, as well as a couple of card games, but there was so much going on that I doubt that every game bought along today was going to get a look in. Well done to Adam and Martin for putting on a great event, it was a great day.

No doubt they'll share a lot of their own images, but in the meantime here's a few dodgy cameraphone shots of the day - I did have a proper camera with me but the battery decided to die. I guess I shouldn't have left it turned on in my game bag.