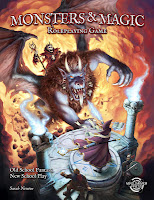 Monsters & Magic is a modern fantasy roleplaying game which mixes cutting edge rules mechanics and narrative techniques with traditional fantasy roleplaying concepts. Specifically designed to be used with classic fantasy supplements and adventures with little or no conversion, it allows players and GMs to pick up their favourite fantasy campaigns and characters and bring them to brilliant new life. It’s a game firmly in the “Old School Renaissance” spirit, and works seamlessly with classic fantasy products, new and old.

“This is a very exciting opportunity,” said Sarah Newton, co-owner of Mindjammer Press and author of Monsters & Magic. “Angus and I have worked together on many titles, including the ENnie-award winning Mindjammer, Legends of Anglerre, and Modiphius’ Achtung! Cthulhu. This deal is another step in our partnership, and allows us to bring the Monsters & Magic RPG and its line of supplements to a wide and discerning audience, using Chronicle City’s proven industry expertise and excellent track record. We’re looking forward to a regular release of Monsters & Magic products with Chronicle City, beginning with the core rulebook this May.”

“Sarah has produced fantastic work for a number of companies over the years and has great vision and ideas. I’m very pleased to be able to work with her again, and Mindjammer Press for the first time, to bring Monsters & Magic to print and retail stores, and look forward to renewing our collaboration on this and hopefully future projects,” added Angus Abranson, owner of Chronicle City Ltd.

MINDJAMMER PRESS is a British games publisher founded by Sarah Newton (Mindjammer, Legends of Anglerre, The Chronicles of Future Earth, Achtung! Cthulhu) and Chris McWilliam to produce roleplaying games and related fiction, including the transhuman space opera novel Mindjammer and the upcoming second edition Mindjammer RPG for Fate Core, The Chronicles of Future Earth, and Monsters & Magic. Find out more about Mindjammer Press at www.mindjammerpress.com or follow them on Twitter @MindjammerPress or Facebook (www.facebook.com/MindjammerPress), or by email at info@mindjammer.com.

CHRONICLE CITY is a new British based games publisher set up by Angus Abranson (ex-Cubicle 7; Leisure Games) in February 2012. Chronicle City are working with a number of companies and designers to publish their games, as well as designing their own roleplaying, card and board games.