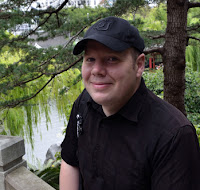 1 - Perhaps you'd like to tell us a little bit about yourself?

Sure, I live in Wellington, New Zealand, have a PhD in political science, work in the public sector and enjoy writing fiction when I‘m not writing games.

I’ve written a couple of unusual scenarios –  a Call of Cthulhu Dark Ages scenario called Malevolence which was published in Worlds of Cthulhu #3 and one an Old West scenario called Sundown which was written to celebrate the 30th anniversary of Call of Cthulhu.  I also wrote a superhero scenario for Icons called ‘The Aotearoa Gambit’, along with some help from Icon’s co-author Morgan Davie.  EPOCH is the first game I’ve written, and is a game about evoking cinema style horror in a single session.

2 - Tell us about your RPG history - what got you into the wonderful world of tabletop roleplaying?

I got into roleplaying as a teenager, and played many different games.  Call of Cthulhu made the greatest impression on me weaving together history and horror and challenging the idea that character survival in games was guaranteed.  Some years later I began running games at local conventions and found the challenge of weaving a compelling and exciting story for a group of strangers, with different backgrounds and expectations, particularly fun and rewarding.

3 - What is it about the tabletop RPG hobby that attracts you? What do you enjoy most when playing a game?

Sharing stories with people.  When I play games I enjoy exploring a story through a characters skin, and exploring how a characters story changes and evolves over the course of a game.  However, I also really enjoy running games, and really working to evoke people and places the characters encounter, and seeing the characters react to these.  The best games create real, visceral, experiences of the characters which pair humour and realism and create strong shared memories which become the fodder of fond memories .

4 - What's your favourite game? What games that are out there at the moment float your boat?

I have always liked Call of Cthulhu, and probably count it as my favourite game.  I’m looking forward to the publication of 7th edition, which I think will freshen up some of the more traditional aspects of the game.  I think Trail of Cthulhu and Esoterrorists are pretty neat too.  I also like supers games, and have followed Mutants and Masterminds since its first edition, although I find a more streamlined system like BASH serves my (character focussed) style of play in one-shots.  I love the way Rogue Trader incorporates so many neat science fiction ideas together and explicitly incorporates motivations of profit-seeking and exploration in the 40K universe.

5 - Do you still get time to play? What are you playing at the moment?

I run a regular Call of Cthulhu campaign.  Between campaign sessions my group plays Rogue Trader, we were also one of the groups that playtested the Call of Cthulhu 7th Edition rules, and we frequently playtest EPOCH scenarios.  I also try to get to local roleplaying conventions to run EPOCH, Call of Cthulhu, Superhero scenarios as well as to play whatever is on offer (most recently Apocalypse World).

6 - The tabletop roleplaying hobby has been through a lot changes over the years and it seems that its death-knell is always sounded when newer hobbies come along, such as collectible card games and online computer games. It still seems to be able to hold it’s own, though – what do you see happening to the hobby in the future? What changes, if any, do you think will have to be made to ensure its survival?

Good question.  I think roleplaying will always hold a basic appeal, because sharing stores is something people have always done.  While some technologies may change some of the ways we interact, I think there is truth that we seek each other out to help share meaning, regardless of the media we employ to do so.
That said, I’m sure some things will change over time.  In my local gaming community Live Action games (one-shot parlour style games) have become increasingly popular, as they offer players the kind of character autonomy that many traditional games don’t, as well as opening the hobby to new people who primarily enjoy costume, drama and improvisation.
So, to keep the interest of its audience, in my view, traditional tabletop roleplaying will need to evolve to incorporate more flexible and innovative ways of helping us to frame and shape our stories.

7 - Out of all your projects, what are you most proud of?

I’m very proud of my ICONS scenario ‘The Aotearoa Gambit’ as the profits went straight to first responders who saved lives during the Christchurch earthquake of 2011.  Collaborating with Morgan Davie and writing that scenario in the immediate aftermath of the quake felt like I was making a contribution – albeit a small one.

I’m most proud of EPOCH though.  Nothing beats hearing great stories from other people who have played and enjoyed your game.

8 - Tell us more about EPOCH; what was the attraction in making such a game?

I wanted to create the kind of horror game that explicitly linked the desired outcomes of the game, with the mechanics.  I wanted a game which reflected the style of one-shot games that I enjoy running and playing; a game where the style, scenario, and mechanics put the characters at the centre of the story, and no matter what decisions are made during the game, this results in a tense and entertaining horror story.  Then I wanted to make that experience replicable for everyone.

As a player of EPOCH, the game is (in my experience) intense.  You begin by creating a character sketch, often drawing on familiar film stereotypes.  Through a structured opening scene and pre-generated character elements you develop some fairly strong ideas early on.  But from that point on, the character evolves as you are busy trying to distinguish your character from the others, while interacting with them – seeking to win the ballot that gets you an extra outcome card, and a better shot at survival.  The flashback you get from not winning the ballot in any round can be almost as powerful, as it provides a terrific way of revealing tantalising glimpses of your characters background.  You are also faced with a tough choice – play your Hero/Zero card as a Zero and reduce another character’s chance of survival, or play it as a Hero and help another character while reducing your own character’s chances of survival?  It’s a choice you will soon have to make; make it interesting and your character’s prospect of survival is likely to increase.  As the game develops, so does your character, as you all-the-while keep an eye on the cards revealed on horror track – hoping that if your character survives, you might even secure a happy ending.

As an EPOCH GM, the game is actually very straightforward to run, as the purpose of each scenario is to act as a framework of horror for the characters, rather than a story which they must investigate.  This allows you to concentrate on adapting the scenario to the characters, bringing the drama to them, emphasising how the horror impacts each of them.  The challenge and ballot mechanic mean you are not faced with deciding who is attacked or eliminated, when, or translating character actions into mechanical tests and rolls – all the characters face elimination, and all the players narrate the impact of this challenge on their characters as they play outcome cards.  You vote along with the players, and the conclusion of each challenge round should provide a natural pause to prepare for the next tension phase.  You also monitor and reveal the horror track, revealing the collective progress of the characters in defeating the source of the horror (and literally laying your cards on the table at the beginning of the game)

9 - What are you working on at the moment?

Currently I’m editing the forthcoming EPOCH scenario collection, ‘War Stories’, which features 5 scenarios set in wartime, ranging from the trenches of World War One to modern-day peace operations in the Congo (previews will be posted here)