Please welcome guest reviewer Rich from the great gaming website Hobbynomicon. Rich has a varied background in wargaming so it's a pleasure to have him here reviewing this great product from Dream Pod 9. 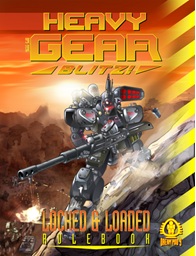 'Heavy Gear is a game universe that stretches all the way back to 1994. With such a rich history of lore and releases such as RPG's, Card Games, Video Games and Wargames, it seems quite crazy that I have actually never even heard of any of it.

It came to my attention recently when I was asked to review the Heavy Gear Blitz 'Locked & Loaded' rulebook. I was provided with the rulebook, however I had no miniatures to actually run through this game, I will instead be reviewing the book itself and giving my general thoughts about the whole thing as a product.
As someone who is a very active War game/Card game/Video game player I think it will be interesting to see what this whole new universe as a whole can do for me.

To start off, let's take a look at the presentation of the books. As a Wargamer I am used to very high quality, colour and excellently illustrated books and I have to say that these books aesthetically didn't stand up to what I was used to. There has clearly been a lot of effort to provide all of this fantastic artwork and even cartography. But to see it printed in black on regular printer paper really doesn't do it justice which is a massive shame. This really blunted my enthusiasm somewhat when I realised I had a significant amount of pages to trawl through, a shame indeed but realistically it is all about the actual content right? So let's get onto that.

The Core rule book weighs in at just over 200 pages, it lacks an index but does have a fairly comprehensive contents. The section that contains the game systems actual rules however is only around 40 pages, this to me is great. If the requirements for playing a game means taking out a large chunk of my day to read extraneous amounts of text, then it probably isn't worth my time.

The rest of the book is made up of fluff (insane amounts of fluff!), model galleries, and even a hobby section which details colour schemes, gives modelling advice and yet more galleries. Now before I move on, I have to say that this really strikes me as odd. There is a section on painting that details colour schemes, yet the book is in black and white? ...
After writing this, I just had to do some digging. It just so happens that this rulebook is available in both colour and Black and White. The B&W version retails for £22.50 whereas the colour version is a mere £45.95. 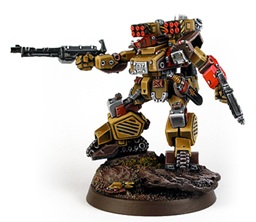 I really don't want to sound overly negative, especially as I haven't even touched on the actual content yet. This however just really doesn't sit right with me.

Consider the fact that you can get the Warmachine or Hordes rulebook in full colour and excellent quality for just £18 which has over 50 pages extra, and for £27.95 cheaper to boot. Despite my opinion toward the value and relative cost of this book, I still have yet to cover the actual contents, in all honesty I am not sure whether or not the contents to me could be so redeeming, but let us delve deeper.

Upon reading the 'Welcome to the world of Heavy Gear' section, I was fairly happy with the background, it didn't particularly wow me or disappoint me. It's safe to say I am completely impartial toward this and this is a great thing as it works as a solid foundation for the game to grow up on.

The factions are fairly interesting and stand apart quite well, with different morals and approaches to issues, and I also enjoyed the map design quite a lot. The way the planet is divided and contains varied biomes within it make for an interesting set to work with, I did also enjoy the premise of Earth participating as well with their own objectives.

Going back to the planet design, I have to say that the maps within are very comprehensive and are very visually appealing. It makes a change to see a lot of effort having been put into such world design and history.

Upon reading more into the fluff it immediately becomes apparent where the franchise gets its name. The various factions within the Heavy Gear universe utilise Mechanised Walkers as a unit somewhere between Tanks and Infantry, these are unsurprisingly called 'Heavy Gears'. I have to be honest here and say that the idea of Mechs is one that I have never really been thrilled with. It's not that I dislike them, it's that everything I have ever seen to do with them has just failed to capture my attention or imagination.

I did find however that a more comprehensive look into them due to reading this book did pique my interest and that coupled with the lore I had absorbed already had me enthused to carry on reading.

After a quick summary of the universe it quickly gets on to the rules of the game, it runs off of a very standard D6 mechanic and quite surprisingly allows the use for both Imperial and Metric when it comes to measurement. I was quite happy with the way the dice rolling and threshold checks worked too, having the highest score among your dice being the final total with any other 6's added on as an additional 1 to that score was an interesting take on scoring them.

The way damage is calculated however seems just a tad convoluted, you first have an opposed roll, the attacker will roll with their Attack Skill, modify it with range, cover, scenario effects, accuracy and even movement speeds.

The Defender will then roll with their Defense Skill and modify the roll with their Speed & Movement mode, Direction of attack and whether or not they have a 'Lock' on the attacker.

Once these totals have been worked out, if the attacker succeeds in getting a higher total, the Margin of Success is calculated (the remainder of what was needed to succeed), the Damage of the attack is then multiplied by the Margin of success, and this final total is then compared to the targets Defence value. If it exceeds it then a Damage box is taken off. If it doubles it, two are taken and so on and so forth. 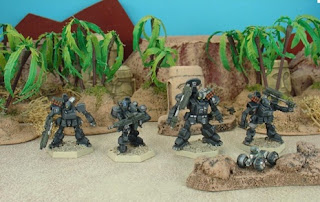 I am in no way saying that this is a bad way to calculate damage, but when I compare this system to all of the others in the games I currently play, it constitutes taking several more steps than seems necessary. I can see how learning this game could be quite a confusing and frustrating process, it seems to me that as it is so comprehensive and provides explanations and rules for SO many situations, it quickly becomes quite a nightmarish wall of text that is quite off putting and demoralising to a Wargamer like myself.

Like most things though, I can see the good where it is. This is clearly a very well thought out system that has had a metric ton of effort poured into it. Sadly, it's just not my cup of tea and ultimately this whole project just isn't for me.

Through reading the game mechanics I slowly found myself losing the enthusiasm that the Lore built up so well earlier on. This book also has a very annoying tendancy to abbreviate important things, a lot of the time I had no idea what it was referring to when it told me I needed to multiply the DM, or that actions are used to activate ECM's.

As a human, I find it quite difficult to remember every single word of a book that I have read, having to skip back to sections I am not sure even exist every couple of minutes again makes this quite a frustrating experience.

To summarise, I would like to say that this IS a good product. I just do not favour it for the reasons mentioned, I can quite clearly see how it would appeal to wargamers who have a passion for Mechs, even without that I can see how the ruleset and scenario's are very appealing. For me though, it just brings too much to the table, as more of a casual Wargamer I find that this is all just too intense for me though. I would like to end by saying do not be disheartened by what I have said, if you even have a passing interest in Mechs or Wargaming, then by all means give it a try. After all, we don't have to like everything do we?

I hope you enjoyed this article, if you have any questions or comments feel free to contact me directly at thehobbynomicon@outlook.com'