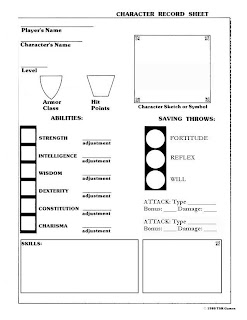 I'll be running a basic D&D science fiction game soon and there's plenty of great OSR games to choose from, 'Stars Without Number' and 'Hulks & Horrors' being two of the best, but I wanted to go a lot simpler than that.

So, for basic PC creation take your red box D&D (or closest version), print out the character sheet to the right, and:

Roll 3D6 for each attribute as normal, you decide which attribute each score is going in. Attribute bonuses apply.

Use THACO for 'Fighter'.

The saving throws 'Fortitude', 'Reflex' and 'Will' are scored at 10 plus the applicable attribute bonus. Fortitude uses the Constitution bonus, Reflex the Dexterity bonus, Will the Wisdom bonus. A successful saving throw is a D20 less than the saving throw score.

Armour class is based on normal armour in the book, so imagine the medieval equivalent in a science fiction setting. Hard leather would be a bulletproof vest, chainmail a combat suit, plate full combat armour.

Weapons remain the same, use bow and crossbow damage for the pistols and such.

Each player is given three points. They can use a single point to raise an 'Attack Type', this being either Ranged (Rng) (for pistols and thrown weapons) or Close Quarters (CQ). Each point spent gives a +1 bonus to their attack roll.

Also, each point can be spent on a single skill, any type of skill they think they need, and the DM/player decides what attribute the skill falls under. Once they've decided, they get the skill at that attribute's score, and they have to roll equal to or under that score on a D20 to succeed in a skill roll; the score can be modified up or down depending on difficulty.

Some example skills and their equivalent attributes (suggested - you can change these if you wish):

You can use the D&D bestiary for creatures, aliens and all that stuff.

And there you have it, sci-fi Basic D&D. I'm working on a simple starship system but in the meantime have fun.
Posted by Farsight Blogger