'Following the Kuala Lumpur incidents, which almost prevented the Human-Sandjarr reconciliation ceremony from being held, the situation on Earth is increasingly tense. The mood has turned ugly, resulting in attacks against aliens and assassinations of isolationist personalities. Meanwhile, the circles of Confederate powers are afire with political manoeuvring, and Mezoke is on trial for high treason, a convenient scapegoat. But when the judges request that Caleb be brought out of his regenerative coma to testify, the Sandjarr agent’s loyalty is put to the test...'


I've been incredibly patient waiting for this book. The first four volumes of Orbital completely drew me in and I've read them again and again - my original review is here - and I've been pretty much salivating at the mouth waiting for the English version of the newest installment. There's always that nagging, doubting voice at the back of the mind, worried that a new volume in this excellent series might not be as good as the previous episodes; that one bad apple mighty sour the whole bunch. I have no idea why I had such thoughts as Orbital Volume 5 - Justice really delivers.

Caleb and Mezoke's relationship really shines through in this volume. They had already struck up a fast friendship in the previous books but this one really shows how close they have become and it's all thanks to the character of Mezoke who, once again, proves to be my favourite personality of the series. It's difficult to explain without giving too much away but she makes a decision that not only allows for some of the most exciting and dynamic illustrations by Serge Pellé but also shows her skill, heart and determination. 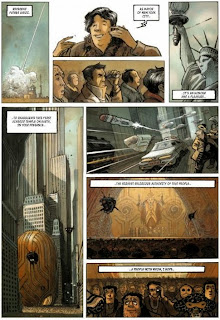 But I'm in danger of giving too much away. First of all, let's talk about Serge Pellé's amazing artwork. As ever, his design is amazing and the organic, lived-in feel of the world he creates is almost tangible. He includes some comical caricature-type human beings but this can be overlooked as it suits the style, but his non-human species design is incredible, as well as his designs for the tech and locations of the future. As I said, it has a lived-in feel to it. The colours are suitably drab and grey, which really helps with the mood, so when there's a brief moment of almost-respite and the colours suddenly bloom into warm, welcoming colours you really feel the change of pace and mood. His imagination is really put to the test on page 31 onwards as we watch Mezoke leap hir way through the Orbital; a myriad of buildings, starships, vehicles and aliens come to life. It's great to look at and made me wish for a movie version so I could see and hear the sights and sounds as she leaps through the busy throng of rush-hour Orbital. If I had to pick an issue with the art it's that the colours are the same drab, misty shade throughout most of the book so one location feels pretty much like the others. If that's my only gripe then I can live with that; I'm a fan of Serge Pellé's work and I can't help that.

Sylvain Runberg's script is just as good as his previous volumes; the action is tight, the dialogue is sharp and to the point and the exposition is just as entertaining. You feel that with every volume you're learning something new about the universe of Orbital but also that there's something bigger just out of reach. The political wrangling and the machinations of certain individuals to wrest political control in any way they can may have been done before but it's great to see it unfold in the Orbital universe. He creates an amazing feeling of uneasiness and tension in the opening, just as he did with Volume 1, and it only gets better until something finally gives, that something being Mezoke. His characters are well defined even though some of them aren't given much panel time, but what drew me in was the story. The stakes are higher, the state of the galaxy is deteriorating and there's the sense that a powder keg is about to pop... and then it's over. Runberg builds this tension and then leaves you on a double cliffhanger that makes you want to tear the book to pieces in frustration. That can only mean he's done a damn good job.

As for the Orbital setting; well, since Caleb and Mezoke left the Orbital in Volume 1 they never really went back to the series' namesake and spent their time on other worlds and Earth, but here they're back and you get see a little more of the great city in all it's glory. Just as I started hoping that Runberg would spend some more time here so that I could learn more about this amazing place we're off again and away. The universe is a vast place and the huge number of alien species means a vast array of habitable worlds and, whole I understand we'll never visit all of them, I'd love to see more of the known galaxy and how it all works. What we need is an Orbital sourcebook that details the history of the setting and the prime races and, more importantly, where the Orbital came from and how it works. It utterly fascinates me.

Was I impressed? I was incredibly impressed. I love this stuff; Orbital is the first science fiction setting to come along in many years that has made me want to delve into it further to learn more about the people that live there and the worlds they inhabit. You really feel like you're only experiencing the very tip of a huge, detailed iceberg and that's thanks to the amazing pairing of Runberg and Pellé. This volume is a great episode in the series and I can't wait for Volume 6: Resistance. Even the title of that gets me excited.