I popped into my local gaming store Titan Games recently to have a look at their Star Wars: Armada organised play, as arranged and supported by Fantasy Flight Games.

Star Wars: Armada is an excellent Miniatures game that I had the pleasure of playing at this year's UK Games Expo, and after a few more games with the starter set it's something I can see us spending a bit of time on. 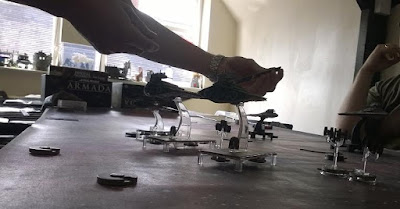 It's not as fast and furious as the X-Wing Miniatures game, as it requires a lot more forward planning as you try to judge the direction and actions of these lumbering hulks well in advance, and while there is some fighter combat in the shape of the squadrons that the ships can deploy it's primarily the great capital ships slugging it out with each other. 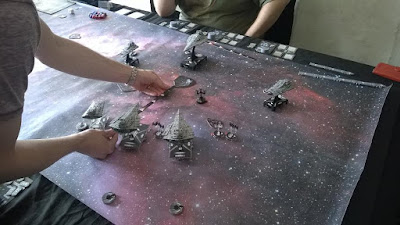 The organised play sessions are a great way for new players to experience the game and for experienced players to test their wits against others, and it's not just Armada that gets the attention but also Imperial Assault and X-Wing, as well as other games in the Fantasy Flight Games catalogue.

Organised play is an excellent idea and really helps bring gamers together and also showcases the games to non-gamers.Check with your local gaming store to see if they're up for the challenge.
Posted by Farsight Blogger