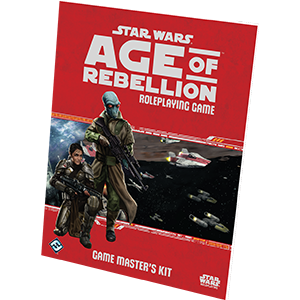 As with all Fantasy Flight Games’ products there is no doubting the quality of the product here; the card stock is hardy and will last a long time, the artwork and layout are all top quality and the content is useful and well designed. Still, it is one of those products that fall into the ‘do I really need it?’ category.

‘Keep your Star Wars roleplaying campaign focused on the action with the Star Wars®: Age of Rebellion™ Game Master’s Kit. The GM Kit includes a GM screen which will keep all the information you’ll need as Game Master at your fingertips during your Age of Rebellion sessions. You’ll also find new rules for running military squads and squadrons. The GM Kit also includes a complete adventure, Dead in the Water, so you and your players can stand strong against the Empire, even after you’ve finished the adventure featured in the Core Rulebook.’

I like my GM kits to be solid and worthwhile, so that I’m safe in the knowledge that I’m getting my money’s worth and the product itself will get a lot of use. If I’m spending money on something I want to make sure it’s an investment worth my while.

First and foremost, the GM Kit gives me something I find invaluable in my games; a sturdy GM’s screen for me to keep my notes and designs hidden behind. I usually use the screen for secret die rolls in other games but I feel the nature of the FFG Star Wars game, and the way the dice help decide the flow and ebb of a story, doesn’t really call for hidden rolls. It’s still handy for keeping your adventure hidden, and as long as the player’s aren’t actively looking over the screen – which, as any GM knows, is punishable by PC death no matter what the game – it’s high enough to hide stuff and there’s room enough to keep plenty of details hidden comfortably. In regards to that function the kit does it’s job well, and the tables are useful in a game (it’s very similar to what we got with the Edge of the Empire screen). With each chart including a page reference so that you can refer to the core rulebook if you have to, it’s really handy.

The adventure, ‘Dead in the Water’, is a decent romp that you should get a couple of  sessions out of; the Rebellion needs droids, and they turn to some ne’er do wells to supply them… and things go wrong. Which isn’t shocking at all. It’s a good solid adventure with action and investigation, and it’s designed to fit in with other adventures already released. That’s a great idea and gives a proper sense of progress to the games, creating an overall campaign. Also in this kit there are also extra rules for military squads and squadrons, which is handy and makes certain elements of the game a bit more dynamic.

It’d be easy to say that if you already have the Edge of the Empire GM Kit then you don’t really need this one, but in terms of the adventure alone I think it’s worth picking it up, and the screen itself is angled more towards the nature of the Age of Rebellion game than Edge of the Empire.

For collector’s it’s a great addition, for completists it is, of course, a must, and for gamers it’s a helpful, if not essential, tool, especially for the adventure. Personally, I’m happy with the whole thing.