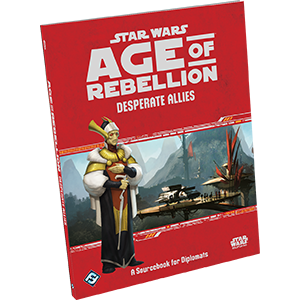 ‘Use your words to fight for freedom with Desperate Allies, a sourcebook for Diplomats in the Star Wars®: Age of Rebellion™ Roleplaying Game. War is one of the major themes of Age of Rebellion, but without Diplomats to spread hope and convert new systems to the cause, war is just meaningless bloodshed. With this career supplement, you can join in tense negotiations, make last-minute deals, and keep the flame of freedom alight in a galaxy overwhelmed by fear of the Empire.

In this book, you’ll find three new playable species – Caamasi, Neimoidian, and Gossam – as well as three new specializations for Diplomats: Advocate, Analyst, and Propagandist. You’ll also find plenty of items and vehicles to ensure your Diplomats are completely outfitted for whatever dangers they may face in the service of the Alliance to Restore the Republic. Finally, Desperate Allies introduces rules for creating Rebel bases, allowing you to enrich your campaign with any kind of base.’

We’ve spent so long running around the galaxy blasting Imperials, running blockades and defeating the bad guys that we’ve hardly had a chance for any kind of breather. Once, just once, we’d like to put down the weapons and try something a little less violent and confrontational. If only there was only a way to play the game with conversation and negotiation! If only!

Now the very nature of Star Wars is pretty much fully described in the name. Star. Wars. Wars in the stars. Great big battles and explosions, as is the driving force behind the franchise. But, there’s always a little room for diversity, and the Desperate Allies book gives you that option. In addition to the Ambassador, Agitator, and Quartermaster from the Age of Rebellion core rulebook, this book gives us the Advocate, Analyst, and Propagandist. These new additions add a lot to the game and allow for new paths to be taken, which adds a lot more depth to the roleplaying experience. Now players have the chance to try and use diplomatic methods and more non-violent skills like computer use and great new talents such as 'Positive Spin', and their skills enable negotiation and NPC-influencing talents. That’s quite a step away from the high-adventure nature of the game.

But it’s not all about sitting around tables and agreeing on the price of space cheese. There's still some room for action adventure types with a selection of weapons and non-lethal grenades. Armour and vehicles, including starships, get a section, but by far the most interesting part of the book are the ideas and seeds for diplomatic missions. There are some great things in here that you could get some lengthy campaigns out of, and diplomatic missions suddenly become quite attractive prospects.

And I think, when all is said and done, that diplomatic missions in a Star wars campaign is going to come down to a group decision. With my group, Star Wars is all about running gunfights and space battles, and the idea of doing more non-action adventures didn't come easy and took a little convincing. Not only that but there were a few moments of PC conflict, when the diplomat of the group wanted to try the negotiation route and the gunbunnies were all about the laser blasts. It made for some great roleplaying scenes but I was concerned that a part of my group was getting a little bored and just wanted to skip the chit-chat and get on with it. That was specific to my group, that's for sure, but it is something I can see cropping up.

The games turned out to be a success but I can't see them being a regular occurrence, but that's fine; the book is there if we need it.

All that aside, this is a great addition to the Star Wars RPG line and adds a whole new dimension to the game. Groups will get a lot of use out of it and the new types of missions give you an entire new angle on the game, and anything that adds to the overall scope of any game is a good thing.