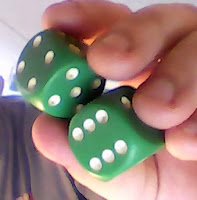 Say hello to two guys who have been my best friends for more than 35 years.

Way back in 1983, when I first started in the roleplaying hobby with my first Fighting Fantasy gamebook 'The Citadel of Chaos', I used two six-sided dice from whatever boardgame that was lying around. Inevitably, as I took the book with me wherever I went and played it avidly I lost the dice and the number of six-siders we had in the house dwindled until the ones we were left with were like gold dust, and protected in a such a way that even Indiana Jones would have found it difficult to get hold of them.

So, if a board game was in full swing the chances were that I had no dice to play my gamebook with. If I was desperate I used to cut out hexagonal shapes and number the sides, stick a matchstick through it and spin it, but this was a pain the backside. The feel and the clatter of dice was what I wanted and I hated it when I couldn't get hold of them.

Seeing this rather silly dilemma, my mother decided to aid her youngest son by buying him his first pair of dedicated gaming dice as one of his Christmas presents. These are the dice you see in the picture. I have no idea where they came from or who made them but even after thirty years they're still in great shape, there's no chips or scrapes and the white of the dots is immaculate, so well done die manufacturer.

They're retired now. They sit in a small chest, safe and snug and six-side up. I have a lot of affection for these dice, and they helped set me on my path to adventure.
Posted by Farsight Blogger