#AprilTTRPGMaker - all in one go

Throughout April, gamers have been answering daily questions about game design. The idea was introduced by game designer Kira Magrann and has been a huge success.

I can into it a little late, around day 9, so below are all the answers I gave on Twitter.

1 – Who are you? - I’m Jonathan Hicks and I’ve written for the BSFA, a Battlestar Galactica comp game and Fighting Fantasy. I like to design and write TTRPGS of all kinds of genres, and do a bit of illustrating, too.

2 – Where ya at? - I’m in the Northamptonshire area of merry old England. Yes, it is raining as I write this.

3 – How did you start creating ttrpgs? - I used to tinker starting in the 1980s, but I really started when I needed a system for an underwater RPG I had in mind and I felt the D12 wasn’t getting enough love.

4 – Describe your work. – I will design for any genre and the mood of my work tends to shift depending on what I’m writing about, from serious to mystical to casual.

5 – Favourite game you’ve worked on. – Up to yet, Fighting Fantasy ‘Stellar Adventures’ and two adventures I’ve written for the fantasy game, too.

6 – Favourite game mechanic? The original WEG D6 System used in 1st Ed Star Wars: The Roleplaying Game. It was easy, quick and malleable, and I used that rulebook for all kinds of settings.

7 – Your workspace. It used to be really cluttered, but now it’s streamlined with less distractions and with a few inspirational items. 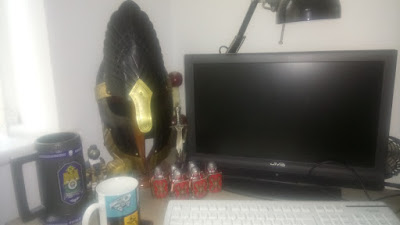 8 – Describe your routine. – I’ll sit down and make sure that there is non-lyric music playing that suits my theme, and then I’ll skim read what I’ve done already and then read through my recent work. Then create, and edit when my brain is emptied.

9 – Describe your process. – I’ll just write whatever is in my head, whether it’s correct or not, so that I get all my ideas down. Once that’s exhausted, I’ll sift through it and give it a basic edit. As long as I can get 2K words done at a time I’m good.

10 – Favourite game to relax with. – To read, that’ll be Warhammer FRP 1st Edition, for sheer flavor. To play, Fighting Fantasy Introductory because it’s so simple, or a gamebook if I have no group.

11 – What’s yer brand? - Farsight Games; it’s nothing official, just something I put my work to when I’m developing new ideas, and for when I release free stuff.

12 – How do you get your work out there? - However I can; social media is huge, of course, and there are Google+ groups that I target along with dedicated forums.

14 – What are yer dreams & plans – Just to write and to continue to enjoy it, no matter what the medium be it games, stories, essays or whatever.

15 – Do you design in public or private? – Private at first so that I get a clear idea of what I want with no distraction, but then I’ll send out snippets or first drafts to the public or selected gamers.

16 – Any design partners? – Not right now. I work alone (throws cape across face).

17 – Favourite form of feedback? – Detailed written feedback. I like constructive criticism I can use and ignore ‘LOLZ U SUK’ comments.

18 – Current inspiration? – William Gibson for a D6 setting I’m working on, and the films Alien, Outland and Moon for a new game I’m envisioning.

19 – Game that’s most essential to your design? – I’m not sure I have one, to be honest. If I had to follow a way of doing things I’d model it on the WEG 1st Ed book; the content of that was amazing.

20 – Favourite design tools? – Just a pad and pen for notes and sketches, a full set of dice and my computer.

21 – How many playtests? – As many as it takes for a new game design as that needs to be as good as it can get, but only one or two for adventures, with different groups if possible.

22 – How do you document ideas? – However I can; I have a Dictaphone, a small notepad and my mobile phone just in case something strikes me. I’ve got files full of stuff, in no particular order.

23 – People who’ve helped you? – Everyone I’ve ever gamed with; I’ve seen and experienced so much that it all helps, and there’s a couple of great groups I’ve joined that are really inspirational.

24 – Most notable achievement? – My Fighting Fantasy work. To be able to contribute to the game that got me into the hobby in 1983 as both writer and artist is something magical.

25 – Being a TTRPG designer means… - Spending a lot of time statting TV shows and movies and getting annoyed that you’re missing the show, or wondering how the same shows would work as RPG settings.

26 – Blogs, streams, podcasts? - Just my blog, www.farsightblogger.blogspot.co.uk , which has been going for a few years. I do follow a lot of blogs but not many podcasts unless it’s gameplay about a game I’m interested in.

27 – Feature a TTRPG designer. – Every single one of them; I know it’s a cop-out answer, but the majority of designers old and new have my respect and thanks.

28 – Favourite interview? – I’ve conducted loads, but my favourite will always Gary Gygax on 60 Minutes back in the eighties. The look of incredulity on their faces when confronted always makes me smile.

29 – Your community. – There’s a healthy one, but I’ve not lived here long and I’ve just started a new group with my wife’s co-workers, a mix of new gamers and experienced ones.