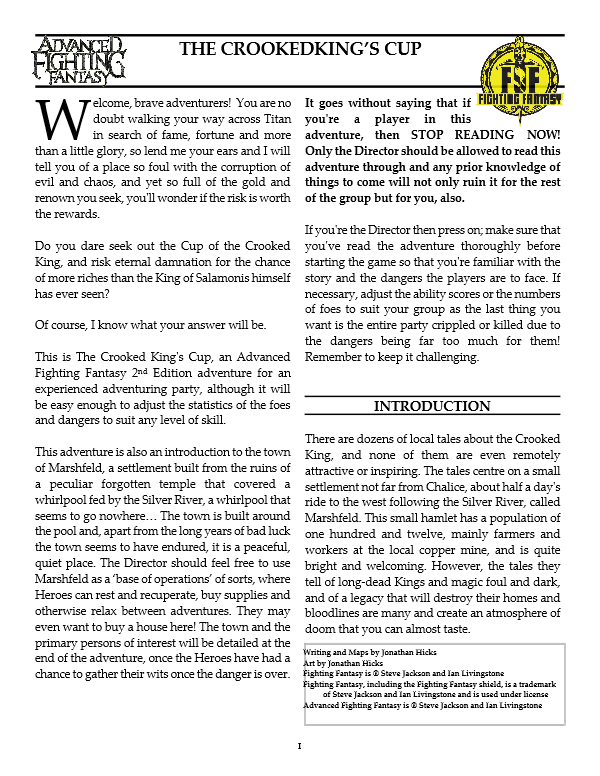 So, my latest Advanced Fighting Fantasy 2nd Edition adventure, 'The Crooked King's Cup', has just been released. This is the third adventure I've written for AFF2e and it's part of a larger story I've had in my head for a few years. There is a final adventure I want to write just to bring two of the adventures, this one and Floating Dungeon, together.

I was disappointed that I never did more art for this adventure but I simply did not have the time. I got one headshot drawn and drew the maps which was enough, but I think I'd like to do some more illustrations for the next one and fill it out a bit more.

What was nice about 'The Crooked King's Cup' was the fact that I not only designed an adventure but that I also created a location, 'Marshfeld', for gaming groups to use at their leisure with history, some locations and a few personalities to fill it out. That was fun, and it's nice to feel that there's a tiny part of Allansia that I helped create.

I have no idea when the next adventure will be done as I'm working on other things, but it'd be nice to do it casually over the next few months to allow me time to illustrate it. I have a story in mind that involves a lot more travel than the previous adventures, and I'm hoping it'll feel a lot more involved with a much more elaborate storyline. That remains to be seen, though, as I do enjoy the exploration and adventure aspects of my previous adventures.

It's all great fun and feels really nice to have fun in a world I have a lot of affection for. Fighting Fantasy was my gateway into gaming 35 years ago, so to be here writing and illustrating for it is something else. There's so much more I'd love to do for it, but only time will tell.

In other news, I picked up the White Box game as a book I could grab as I'm working on my current project. It's Swords & Wizardry compatible and the adventures I'm working on for publication will be following the OSR line, and I hope I can make it attractive to D&D players old and new.

It's a great book and the artwork is a lot of fun, the kind of black and white ink art I hope to create for my work. Great stuff.