I'm a big Fria Ligan fan and I have had amazing games with 'Coriolis' and 'Tales from the Loop'. This news is going to create a gaming powerhouse filled with great talent who already have a proven track record. There's amazing things ahead. 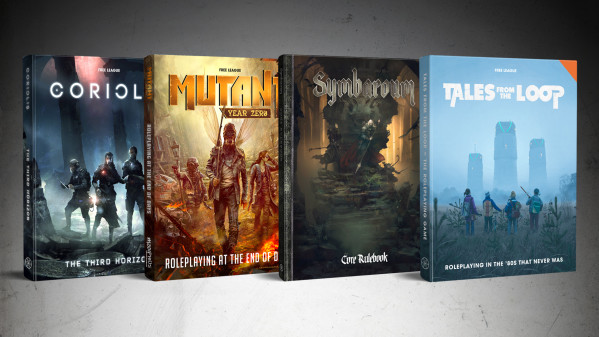 Free League Publishing and Team Järnringen, two of Sweden's leading publishers of tabletop roleplaying games on the international market, will become one. The merger of these publishers of acclaimed RPGs such as Tales from the Loop, Symbaroum and Mutant: Year Zero, is underway. The combined company, to be named Free League Publishing, is planning several major game launches in the year to come.

"We're very happy that the merger is finally happening," says Free League co-founder Tomas Härenstam. "We have a long history with Järnringen, great respect for their work, and we share similar philosophies on game design. Together we will be stronger, better, and have a greater international reach. And we'll have even more fun at work."

The two teams are already working together, with former Järnringen members involved in current Free League projects, and vice versa. To the combined company, Järnringen brings the acclaimed fantasy RPG Symbaroum, which will now become part of Free League's line-up of award-winning games such as Mutant: Year Zero, Coriolis - The Third Horizon, and Tales from the Loop, as well as the upcoming RPG Forbidden Lands and Crusader Kings - The Board Game.

Free League was initially created ten years ago, as a group of freelancers writing supplements for earlier (Swedish) versions of Mutant and Coriolis, published by a previous incarnation of Järnringen. The fact that these two game franchises are still part of the Free League RPG lineup today is appreciated by the members of Team Järnringen.

"There are many benefits of this merger," say's Järnringen co-founder Mattias Johnsson Haake. "But of course, the idea of working on Mutant and Coriolis again is especially appealing. Coriolis was created by us, and is in a way like a child we never got to see grow up. Mutant also has a special place in our hearts."

The joint company will be named Free League Publishing, a decision made in full agreement between both companies. Free League Publishing has had a longer presence on the international market and a bigger reach among both gamers and sales partners. In addition, the name Free League is taken from a faction in the Coriolis RPG.
Fans and gamers of Free League and Järnringen games should not experience any immediate impact from this merger. All existing game lines will continue as planned. In addition, a number of new game projects are being planned for 2019. More information on these will be revealed at a later date.

Our first game, the post-apocalyptic Mutant: Year Zero was awarded a Silver ENnie for Best Rules 2015. The sci-fi adventure Coriolis - The Third Horizon, was awarded a Judge's Spotlight Award at Gencon. And we are proud to say that our latest roleplaying game Tales from the Loop RPG based on Simon Stålenhags iconic artbooks made a grand slam at the ENnie Awards 2017, winning five Gold ENnies - among them Best Game.

Our upcoming fantasy RPG is Forbidden Lands, with art by critically acclaimed artist Simon Stålenhag and iconic Swedish fantasy artist Nils Gulliksson, lore by fantasy author Erik Granström and game design by the team that created Mutant: Year Zero, Coriolis: The Third Horizon and Tales from the Loop RPG. Forbidden Lands was the third most successful RPG Kickstarter in the world 2017 and was recently named one of the most anticipated RPGs of 2018 by EN World.

We have also released the critically acclaimed art books Things from the Flood and Tales from the Loop by artist Simon Stålenhag. His third book The Electric State has been released by Free League Publishing exclusively to the backers of the kickstarter campaign.